Information and the history of the Duchess of Kent Military Hospital DKMH Catterick Yorkshire: 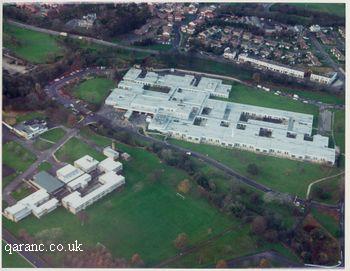 
DKMH Catterick opened on the 6 October 1976 and replaced an old hutted hospital from the pre World War Two era (cited in the book
Sub Cruce Candida: A Celebration of One Hundred Years of Army Nursing

This new Duchess of Kent Military Hospital cost £3 million to build. It closed on the 1 July 1999 after a review of the Army Medical Services though a psychiatric unit remained which provided 20 in patient beds and an out patient department. No sectioned patients were admitted and these were cared for at NHS secure units. There was another defence review by the Ministry of Defence (MOD) in the year 2001 which resulted in the Duchess of Kent's Psychiatric Unit closing. 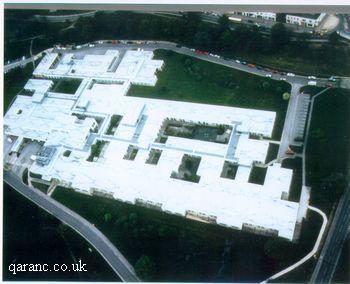 Some of the staff were transferred to nearby Ministry of Defence Hospital Unit Northallerton. Read more about it on the MDHU Northallerton page.

The then Colonel in Chief Her Royal Highness Princess Margaret visited the Duchess of Kent Military Hospital in Catterick on Wednesday 30 March 1994. HRH was met by the Colonel Commandant Colonel D.G.M. Anderson RRC and the Vice Lord Lieutenant Major General Henry Woods. They were joined by the Commanding Officer Colonel B Hannigan L/RAMC and Colonel S.B. Davies L/QARANC. Patients and staff lined the corridor of the DKMH to welcome Princess Margaret and she then went on to tour the hospital and meet patients and staff.


This article, from the December edition of Soldier Magazine and reproduced with kind permission of www.soldiermagazine.co.uk shows that it was nicknamed The Catterick Hilton due to it being the first purpose built military hospital since 1916, rather than a conversion from existing barracks. Photos show the canteen, nursing students and even the "gravy train” meal trolley. 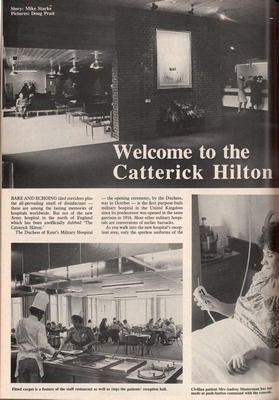 The Commanding Officer was Colonel Ray Gathercole who was also the resident otologist.

It cites that there are 400 staff, split equally between RAMC, QARANC and civilian.

Civilian patients from Richmond, Swaledale and Wensleydale, as well as road traffic accident victims from a 25mile section of the A1. 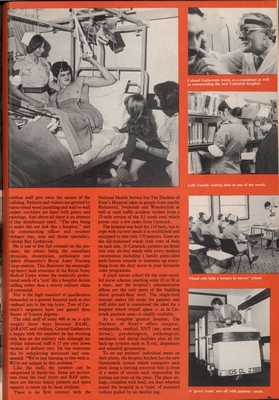 It was built for 210 beds but to cope with the then current needs it was established and equipped to take only 170 patients.

These were broken down to six bed wards on a single level, with a pupil nurse school and administration offices above.

Sadly none of the QARANC.co.uk team had a posting at the Duchess of Kent Military Hospital Catterick and would love to expand this page with more details about this former army hospital and include a photograph. If you are a former or serving member of the Queen Alexandra's Royal Army Nursing Corps we would love your help.


Below are a collection of memories from former staff of the Duchess of Kent Military Hospital DKMH Catterick:

I was posted to BMH Catterick in 1969. I was there as a pupil nurse from July 1969 till Feb 1970 where I was posted to BMH Iserlohn. At that time the hospital was a full serving hospital with Medical, Surgical, Children’s, Psychiatric, Midwifery, Emergency and Operating Theatres. The hospital was a few minutes away from the main camp where the QA’s were billeted. We have the Sands Soldiers home almost next door when we frequently for lunch rather than walking back to the billet.

I remember one corridor that ran all around the back part of the huts which connected them, so you didn’t have to go outside. It was a cold drafty place in the winter but the care for the patients, military and civilian, was top notch. Catterick was a fairly large garrison back then with Service battalion, Field Ambulance, 17/21st Lancers, Military Police and a few I don’t remember. Susan Longbottom Nee Abbott.


I particularly remember the old army hospital at Catterick in the early 70s (1970s not 1870s - I'm not that old!). There was an accommodation block in which there was a QA wing and an RAMC wing with the central block divided between the two. I remember leaving the RAMC wing one winter morning and seeing the tracks in the snow between the two wings! (Ken RAMC)

I served at DKMH in Catterick for 5 years all told, I was there when Princess Margaret came and was lucky enough to meet her. I was on the committee and organised our summer ball which was brilliant with the men in tuxedos and the ladies in ball gowns. I stayed behind when they all went off to Iraq the first time and we stayed up all night to be there when they came back at 6am. It was such a brilliant place to be at the time. I worked on every Ward and most Departments in my time there. Allyson Morgan.

In 1977 my father (a serving soldier) died in Germany and we were relocated to military housing in Catterick Garrison while waiting for a council house in Durham where my mum was from. I had been suffering significantly with recurrent tonsillitis in the previous 3 years and had been very unwell with it several times in the previous 12 months.

I was unwell shortly after getting to Catterick and was rapidly assessed by the ENT service and was admitted for a tonsillectomy shortly after my 14th birthday. As a teenager I was sent to an adult ward! I was mortified to be asked to provide a urine sample as part of the admission process and managed to hang on until about 10pm before my bladder was about to explode before whispering my dilemma to one of the nurses. I was in a 6 bedded bay with all these "ancient" ladies who were probably only in their 30s and 40s. I was very well looked after for my week long stay. In 1981 I joined the QAs myself but never visited Catterick again in my 11 year career. Jackie O'Sullivan

My name is Bill Haylett and I was lucky enough to work at DKMH as a civilian "senior staff nurse" on Ward 3 (orthopaedics) from1994-1998.

I had been working in Saudi Arabia for their "military" at the King Abdul Azziz hospital in Tabuk. When my contract finished I came home and applied for the post of Endoscopy nurse at The Duchess of Kent Military Hospital, but at the interview with Col Mumford George it was very apparent that I new very little about endoscopies! However, Col George asked if I would be interested in a job on the orthopaedic ward ( which I jumped at), and so began one of the happiest periods of my nursing career.

Unfortunately about that time the hospital went into decline, we lost the A&E consultant and therefore all the major accidents/injuries went elsewhere.

On ward 3 we always seem to be busy especially with "electives" who seem to consist mainly of "old soldiers" from all over the country! Nearly all of them were convinced that their service in the armed forces entitled them to be "fast tracked" we never disappointed them by telling them that anyone could be referred to our surgeons by their GP’s.

Notable members of staff that I was privileged to work with were Capt Sarah Francis (ward manager), Mrs Hillary Squires, Mrs Liz Bodenham, WO2 Bell, Maj Stevie Webster, Lt Col Quinn (matron), Maj Gac, Lt Col Stewart (surgeon),also Col Hobbs (surgeon) and his wife who was a "civi" nurse in anaesthetics. And many, many more. When it was decided to close/reduce the hospital I unfortunately was not kept on and had to return to the NHS at North Tees District General Hospital (where I had trained in 1986). It was from here that I was encouraged to join the TA by a colleague, who of a similar age to me was already a member!

In December 2000 I was enrolled as a Nursing Officer with the rank of Captain in 201 Field Hospital Northern (V), based at their ‘C’ Detachment in Norton, a suburb of Stockton on Tees.

In September 2001 after much negotiation I was chosen to go on Ex Saif Sareea in the first Tranche and spent two busy weeks with 22 Field Hospital Thumrait Oman, we were attached to 22 Fld Hosp along with people from 306, 212, 204 (mad as hatters!!), 208, 203 and the Dutch!, it was here that I met a lot of old (regular) colleagues from DKMH! (the QA’s world is very small as I was to find out later in my TA service!!). They found it very novel that I was a member of the TA and a Captain to boot!

With the advent of 9/11 just before we went out to Oman we were all quite sure that we would be sent on to Afghanistan, little did we know that our worries would shortly be realised, but in a different country: Iraq.

In March 2003 I was "called up" well that’s the official version, really, I had been pestering my CO to be sent! And as she had a soft spot for me she relented and after much toing and froing we ended up in Kuwait attached to 212 Field Hospital (Birmingham) and then on March 20th I went to war!.

Later on we moved up to Iraq and took over from 34 Fld Hosp. On returning to UK in July 2003 I decided to apply for FTRS (Full-Time Reserve Service) in the hope I might get another posting to Iraq or somewhere equally exotic.

On arrival at MDHU Northallerton I was interviewed by non other than Lt Col Webster whom I had known from DKMH! (and in no uncertain terms told that I would not be posted anywhere). This was to prove to be only the start, as there were lots of old colleagues of all ranks. I think they were as surprised to see me in uniform and a Captain! let alone as I was to see them all over again.

I served for three years as an FTRS at MDHU Northallerton before leaving and returning to 201 Fld Hosp. In March 2008 I retired from 201 Fld Hosp still a Captain but with a lot of happy memories!!!. I am now employed by St John & Red Cross Defence Medical Welfare Service as a Welfare Officer, last year I went to Iraq again, attached to the Field Hospital on the C.O.B. at Basra, very eventful but worth the risk. Next year (2010) I am hoping to be sent to Afghanistan to Camp Bastion (at last!!!). William Haylett QA CAPT (ret)