History of the army Royal Herbert Hospital Shooters Hill Woolwich London and the Brook with ghost story and the modern converted Pavilions:

The two storey Royal Herbert Hospital was built by the authority of Sidney Herbert the 1st Baron Herbert of Lea. Sidney Herbert was responsible for sending Florence Nightingale to the Crimea and led the War Office reforms after this campaign. He was particularly interested in health care and reducing military mortality rates from diseases and ill treated war wounds. There is a statue of him at Waterloo Place in London. The building work cost £209,139 and the land purchase was £6,394.

It was also known as No. 12 Coy (Company) RAMC (Royal Army Medical Corps). 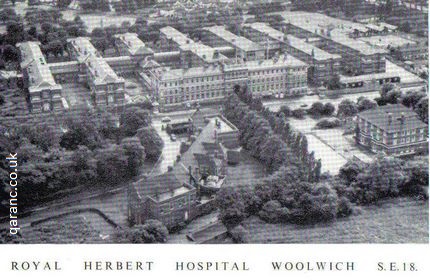 Image courtesy of Alexandra Edwards (nee Rainey). This aerial shot was an RAMC Christmas card from the 1960's.


The architect was Captain Douglas Galton and it was planned in the pavilion style much approved of by Florence Nightingale. This style aired and gave natural light and was thought to sweep out bacteria.

has photos of the Royal Herbert Hospital which includes wards, nursing staff and the operating rooms.

It was called The Herbert Hospital for its first few years of opening. It had opened in 1865. The first Governor was Colonel Shaw who took up his appointment on the 1 November 1865. The first patients were transferred from the nearby Royal Artillery Garrison Hospital at Woolwich. 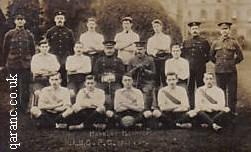 The picture on the left of the Royal Herbert Staff is a copy of a postcard bought on Ebay. Qaranc.co.uk do not know anything more about the image. If you can add any information then please contact me, thank you.

The first Superintendent General of Female Nurses was Mrs Jane Shaw Stewart who also held the same post at the same time at the newly built Royal Victoria Military Hospital Netley. Mrs Shaw Stewart had served with Florence Nightingale in the Crimea. She was joined by eight attendant lady nurses who worked on day duty and lived at the nearby quarters in the Female Infirmary in Woolwich (cited in the book Queen Alexandra's Royal Army Nursing Corps (Famous Regts. S)

by Juliet Piggott). This was at a time when military patients were not used to females attending to them and were mostly against their presence. Even one year later there was only one nurse allocated to each ward and none were permitted to work on the venereal ward or the convalescent wards. 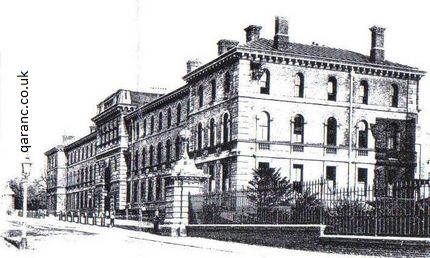 Postcard courtesy of Alexandra Edwards (nee Rainey) which was sent to her by the Greenwich Local History Society.

Her Majesty Queen Victoria visited in March 1900 and was so impressed with the care and treatments of soldiers that she honoured it with royal status and patronage. However Juliet Piggott in her book Queen Alexandra's Royal Army Nursing Corps (Famous Regts. S)

considers that the Royal prefix may have been bestowed some years later because an invitation card from the visit of King Edward VII and Queen Alexandra on the 16 February 1903 does not mention the Royal Herbert Hospital but just the Herbert Hospital. The name is also written as this on the Court Circular that was issued by Buckingham Palace.

Queen Victoria was in a wheelchair at the time of her 1900 visit and gave patients on the surgical wards that she visited posies from Frogmore.

The drawing by S Begg of Queen Victoria giving a bed bound military patient a posy of flowers at Herbert Hospital in Woolwich in March 1900 when she visited two surgical wards can be seen as an illustration in the book Queen Alexandra's Royal Army Nursing Corps (Famous Regts. S)


It became the main orthopaedic centre for the British Army. There were also general surgical and medical wards for army personnel and their families. At its peak it had 15 wards which accommodated 650 beds. This included a guardroom and prison ward for 28 army prisoners. Though in the first two years of opening it had no more than 300 patients at any time.


The wards were numbered A through to G , ie A1-4, B1-4 etc. A1 and A3 were used for accommodation for female ORs A2 and A4 were Officers and their wives I think, F4 was the STC and F1-3 were for orthopaedics. The Herbert specialised in orthopaedics. There were no D wards as the first floor was Path Lab and the ground floor was Physiotherapy and medical records. The Operating Theatres were at the South end nearest the Brook. The basement was home to Things like linen other stores, the cookhouse, the barbers and the X-Ray school as it was then. (With thanks to Radiographer Bob Atkinson RAMC).

A free Kindle download is Driver H Taylor's "In Memory of Our Night Nurse" - a First World War Poem from the Royal Herbert Hospital, Woolwich

. He served in the Royal Field Artillery and wrote this while a patient and presented it to VAD nurse Miss Edith Mary Hall. There is a photograph of patients and staff from 1918.

The photo below is of the Brook Hospital Shooters Hill London during the First World War. The Brook was just down the road and in the photograph is the Chief Superintendent of the Ambulance Station and his staff during the Great War. His name was George Oliver and he was a former Guards Officer. If you have any information about this period please contact me. Thank you. 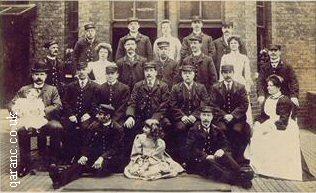