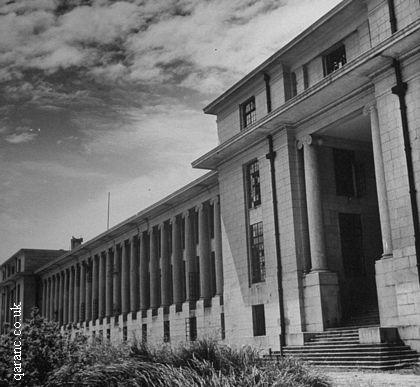 The War Memorial Nursing Home built at Mount Kellett was to commemorate those who lost their lives in the 1914 to 1918 war. It opened 16th march 1932. I do not have any more further information of this time or the WW2 era. The building was built in attractive creamy white stone: granite or limestone I think.

BMH Mount Kellett was located on the Peak Hong Kong and commanded wonderful views of the South China Sea and surrounding islands.

In September 1946 the War Office bought this hospital as United Services Hospital. I only knew this as BMH Mount Kellett which continued to operate until 1967. I believe it may then have been empty until the mid 1970s when it was demolished. The hospital was acquired by the government from the war dept in 1967 for $500,000 it also included the transfer of a block of flats lower down Mount Kellett Road which were previously used as QA Sisters quarters and later renovated into 6 flats.

The hospital covered 111,000sq ft on 4 floors. The site footprint being 48,000sq ft. It had been considered as being used as a convalescent hospital for infectious diseases. However in 1971 the initial cost of refurbishment of $3.5m had risen to $6m so the scheme was abandoned.

Kings Park, may also be known as Wylie Road, was another BMH which opened in 1967 presumably to consolidate hospital services as far eastern forces were being reduced which was way after my time of 1961-62. Hong Kong forces were reduced by 15% between 1975-1978 and this hospital closed in 1996 with all health care for the military passed to civilian doctors.
Trevor Harvey (RAMC).

Qaranc.co.uk would also like to thank Trevor Harvey, who worked in the STC isolation ward, for the photograph of British Military Hospital Mount Kellett Hong Kong at the top of this page as well as kindly providing the useful info.

Below is Major Moran, Matron 1960s, helping to prepare the Christmas pudding, aided by Cpl Mason Army Catering Corps, two cooks, one of whom is a Ghurka and Sgt Walters of the ACC. (Kindly provided by Brigadier JB Bloxham CBE who was the Hospital Catering Officer to both Mount Kellett and BMH Bowen Road Hong Kong - more of his photos and his memories can be seen and read on the love stories page). 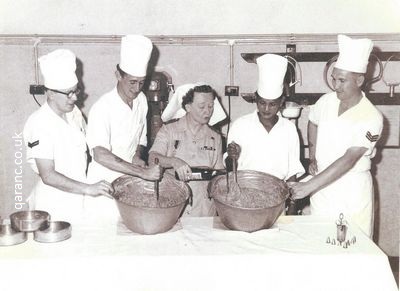 Jan O'Leary (nee Tedstill) was posted here from 1959 to 1960 when the army was still on operations in the Far East. She kindly shares her memories:

I was a theatre sister in the Queen Alexandra's Royal Army Nursing Service but I had to relinquish my commission on the day I got married to Lieutenant Colonel Denis O'Leary 1st Bn 7th DEO Gurkha Rifles who were based in the New Territories in Hong Kong. We first met when he was duty officer and came to see a Gurkha Officer who was a patient. We were married at St Joseph's Church, Fanling, Hong Kong. 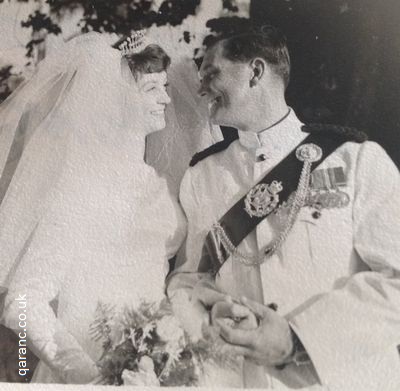 We then spent a further ten years in the Far East in HK and Malaya during the Borneo campaign when the Battalion was on operations.

This photo was taken on the balcony outside the operating theatre on the top floor of Mount Kellett in 1959, when I was theatre sister (Lieutenant Jan Tedstill) where I worked with Major Bridie Galvin QARANC , Captain John Walkden was the radiologist, Lt Col Thompson was senior surgeon, Captain Douglas Eadie was a surgeon, Captain Chris Brasher was ENT Surgeon, all were RAMC. 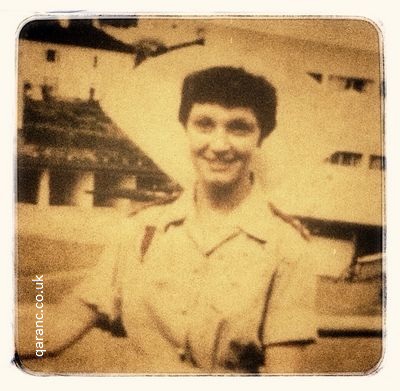 The CO was Lt Col Dick, RAMC, Matron was Lt Colonel Pulham, her deputy was Major Ratcliff both QAs. There was also Brigadier Fitzpatrick QA based in Singapore. All those personnel attended my wedding. Other personnel that I remember are Major Nancy Marsden, Major Betty Curry, Captain Pat Malloy, Captain Audrey Wisden, Lt Pat Grant, Lt Olive Pinions and Lt June Laverick. The housekeeper in the QA mess, was Barbara Hall who later married Captain Barry Bloxham ACC. Happy days, sad that such a magnificent building was demolished. The views from there were quite stunning over the South China Sea. Jan O'Leary nee Tedstill

It was in a country church on the Chinese border
Everything arranged through Part One Order
In the army at Battalion level this how
Arrangements are made to clearly show
That events will take place in a certain way
Especially when it is for a wedding day.
Everyone knows their role and place
And they will be able to identify a face
Whether as an usher, best man or groom
They will know where to sit or stand in the room
Regimental orders kept all informed of the routine
Which had to comply to the second on the scene
The bride would arrive exactly two minutes late
Not one second longer or minutes as their first date.
She would arrive on the arm of the Bn Colonel
At the church door where bridesmaids would enable
The long train of her dress to spread far and wide
To cover the aisle carpet as she marched to his side.
He at attention in uniform, in its scabbard his sword
Realised through endurance he had got his reward.
They met in the May, a ring in July and now November
The fourth, fifty three years ago a day to remember
But that proud chap at the altar cannot now recall
That day when they first met and he was ten feet tall
As she called him, 'Sir' and looked into his eyes
They always knew there would never be any good byes.

More of Jan’s poems can be read in Random Reflections

and her memories have been published as Starched Caps, Collars and Cuffs

Trevor also told Qaranc.co.uk about the New Years Dance All Ranks Party that took place at the Union Jack Club in Hong Kong on Saturday 6th January 1962. The three young QA Officers in the photograph below are Sister Constantine (first left in picture), Sister M.Cavanagh (centre) and Sister D.Spooner (right of picture). 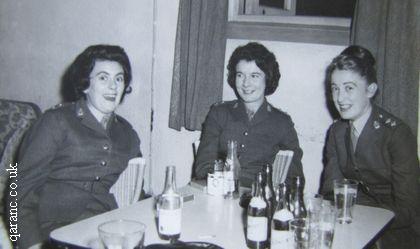 Below are more photos from the collection of Trevor Harvey. These include some taken at the Hong Kong Union Jack Club of a QA Officer dancing and a group of staff enjoying socialising at the New Years dance at the Union Jack Club HK organised for officers and staff of the hospital. All officers had to wear uniform. The tall officer on the right dressed in the bow tie is the CO Colonel Dick, Trevor is in the centre picture in the lightest grey suite. 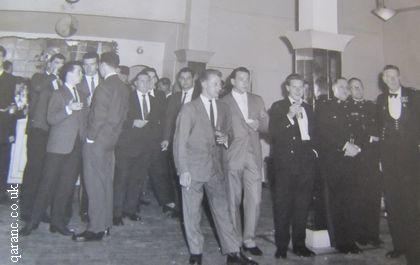 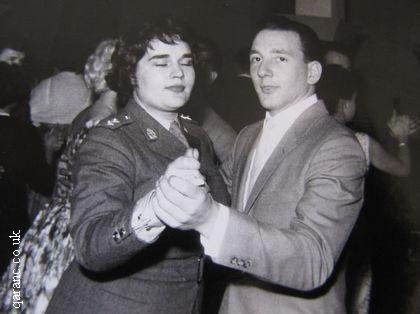 Below is the Christmas Menu 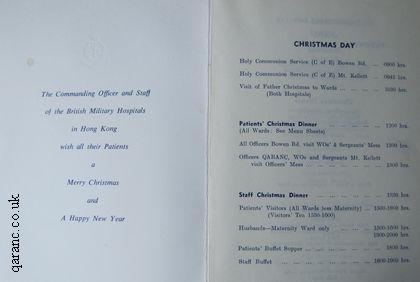 Below are the printed menu and events which took place for Christmas and New Year 1961 . 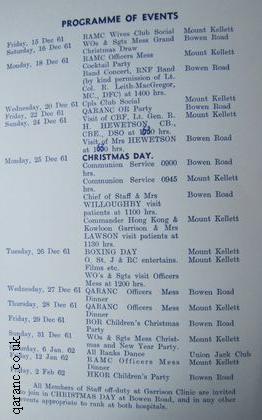 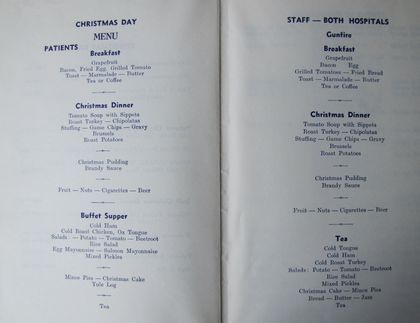 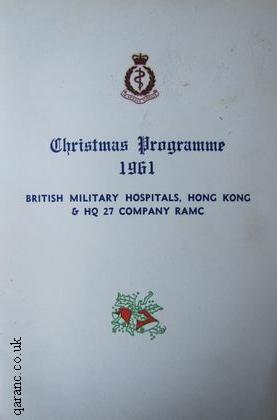 
Sadly none of the QARANC.co.uk team had a Hong Kong posting and would love to expand this page with more details about this former army hospital and include a photograph. If you are a former or serving member of the Queen Alexandra's Royal Army Nursing Corps we would love your help.


The following pictures have kindly been provided by Chris Lewis who served with 27 Coy.RAMC from 1960 to 1962. He recalls:

I very much enjoyed my time at BMH Mt Kellett and I was lucky to have an interesting job. I was involved in Admissions and Discharges, Medical Boards, Death Certificates and a lot of sports. We had quite a good hockey team, mostly doctors, and a good cricket team, so time went too quickly really. One of my highlights during my stay was that we won the Minor Units Knockout Cup at Cricket Final in March 1962 and unfortunately I never got to see the photograph that was taken of our team. The match was between 27 Coy Mt Kellett and 18 Fd Ambulance Fanling so it was serious. The Cup was presented by the Governor of Hong Kong so we were full of ourselves afterwards.

Names of the staff that I remember were Col Dick the CO, Major Moran the Matron and Captain Douglas the Admin Officer. He doctors were Dr Brasher, Earlam, Paddle and Bennett and the specialists were LT Col Thompson and Lt Col Webb.

The Royal Army Medical Corps quarters which were 1 mile from the hospital. 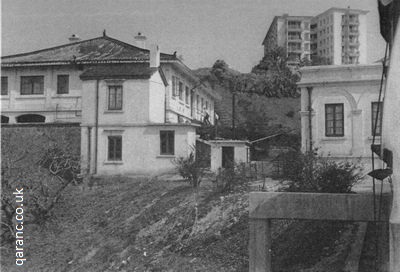 View of BMH Mt Kellett from OR quarters 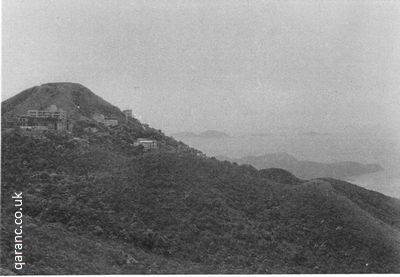 Dhobi man at work in the staff quarters 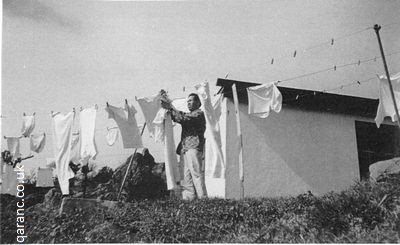 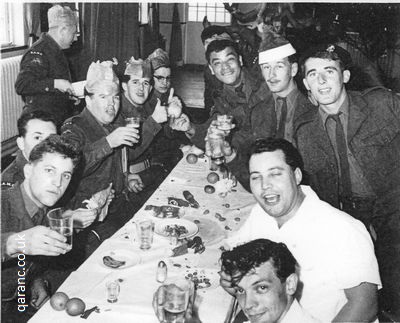 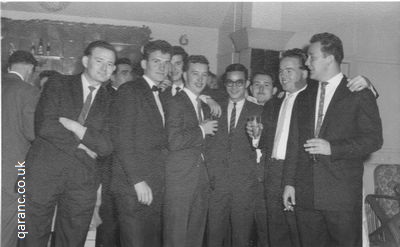 More of Chris’ wonderful photos from his time on the Island can be viewed on the Wan Chai Hong Kong Aberdeen Harbour 1960s page.


The following photographs have been kindly provided by John Simons, who worked here as a Radiographer from June1961 to May 1962 during National Service. He recalls:

My sergeant was Peter Sinclair who I had heard of through Photography. The Radiologist, who arrived two months later, was Lt. Col. Proven, previously principle of the Army X-ray School. Later still the schools senior lecturer arrived as well, sadly name forgotten. Eventually, because NS radiographers only manned Mass X-ray units they decided to test me out and I left Mount Kellett as a grade 2 radiographer probably the only NS radiographer to do so, perhaps I should have signed on but that is another story. My return journey was on the Oxfordshire. 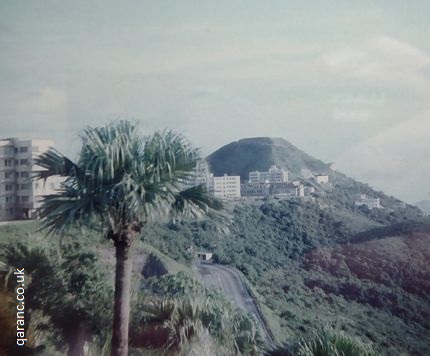 The other ranks quarters on Plunkets Road: 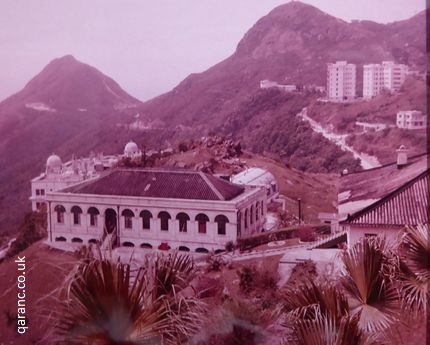 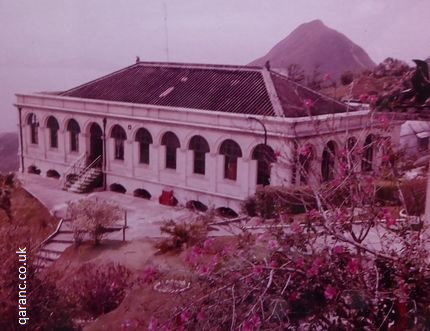 The foundation stone found on a tiled area, above the two bungalows where John used to watch planes land and take off at Kai Tak; he thinks it now may be part of the Governor’s old summer residence. 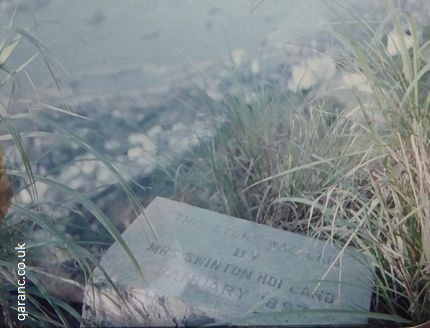 It reads This stone was laid by Mrs Swinton Holland January 1897. Her husband was a naval Commodore in charge of Hong Kong. The building nearby was his residence.

Just after I left for the UK in 1962 I was told that during a typhoon an uprooted tree came through the roof of the quarters and landed on my old bed. As a result of the damage I assume the replacement quarters were adopted but they could never compete with the views of the earlier quarters. I quite enjoyed my year at the hospital and almost regretted giving up radiography but in the end my working life revolved around the use of radiation in the plastics industry so all was not lost.


View more photos of BMH Mount Kellett at Flickr.com (with thanks to Peter Truscott).