The Allied Advance, known as The Hundred Days Offensive, took place from 8 August - 11 November 1918, and brought the First World War to a close. The Allies launched a series of attacks on the Western Front with Australian, Canadian, British and French forces together with American, New Zealand and Indian troops. The Allied offensive began with the Battle of Amiens on 8 August.

After the German Advance of spring, it became clear to the Allies that the German army was overstretched and weakened. For example, the Germans at Amiens had not had the time to build up their defences and the British Expeditionary Force's combined artillery, infantry and tank offensive, with the French Army as well as troops from the United States and Italy, launched an offensive decisively turning the tide of war toward an Allied victory.

On 9 May 1918 QA Kate Luard rejoins No.41 Casualty Clearing Station at Pernois, between Amiens and Doullens. In her letters home she sounds invigorated, but it is spring, and she has had time to write home describing the landscape and countryside before the Allied Advance commences.

Monday, May 13th. Pernois. There is so much to see to in starting a new site with a new Mess consisting of Nothing, with the patients already in the Wards when we arrived, that there has not been a moment yet to unpack my kit, barely to read my mails, let alone to write letters, other than official and Break-the-News, till now 10.30 p.m.

We had our first rain to-day with the new moon, and the place has been a swamp all day. The great Boche effort is supposed to be imminent and this wet will delay and disgust him.

The C.O. of this Unit is very keen, full of brains, discipline and ideas. Everyone is out for efficiency and we are all working together like honeybees. There is a very fine spirit in the place. The Sisters are all so pleased with our unique Quarters that they're ready for anything. The C.O. has gone this time to the opposite extreme from daisies under our beds and we are sleeping in the most thrilling dug-outs I've ever seen. …………

The Camp itself is very well laid out with roads to the entrances to the wards for Ambulances, to save carrying stretchers a long way. We evacuate by car to the train at the bottom of the valley.

May 22nd, and the hottest day of the year. This full moon is, of course, bringing an epidemic of night bombing at Abbeville, Étaples and all about up here. ……. I had a lovely motor run to the Southern Area B.R.C.S. [British Red Cross Society] Depot yesterday, through shady roads with orchards blazing with buttercups.

May 25th. Nothing to report here: people seem to think he [the Germans] has his tail down too badly to come on, and it looks like it. An inimitable Jock told me to-day that you only had to fill a Scot up wi' rum and he could do for as many machine-gun nests as any Tank!

May 28th. There's nothing to say that one may write about, but a good deal to do.

Whit Sunday. We had a divine day here and it's a translucent night of sunset, stars and moon and aeroplanes, and spoilt by the thunder of the guns which are very busy now on both sides. This is a Sky Thoroughfare between many Aerodromes and the Line, and from sunset onwards the sky is thick with planes, and the humming and droning is incessant and very disturbing for sleep. There are a hundred interesting things one would like to tell you, but everything comes under forbidden headings.

The men have the same spirit, the same detached acceptance of their injuries, and the same blind unquestioning obedience to every order, the same alacrity to give up their pillows ….. as at the beginning of this War. And they are all like that - the Londoners, the Scots, the Counties, the Irish, the Canadians and the Aussies and the New Zealanders.

The Jock is helping in a Ward and bends over a pneumonia man helping him to cough, or cajoling him to take his feeds, with an almost more than maternal tenderness or … helps with a dressing with a gentleness and delicacy that no nurse could hope to beat.

Their obedience is another unfailing quality. When a convoy comes in at night they're out of bed in a second, filling hot bottles, and undressing new patients and careering round with drinks. If a boy asks for a fag after a bad dressing they literally rush to be first to get him one of theirs.

I could do with some more Sisters. Must do a round now and see what's likely to be wanted during the night. 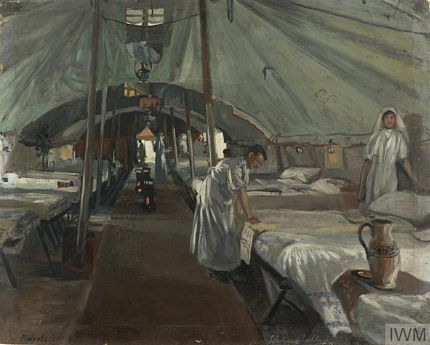 Tuesday, June 4th, 10.30 p.m. He is at this moment making the dickens of an angry noise about 100 feet directly overhead: whether he means to unload here or not remains to be seen. We've had rather a busy week…The weather continues unnaturally radiant. I have never worked in a more lovely spot in this war. There is always a breeze waving over the cornfields and the hills are covered with woods near the valleys, with open downs at the top. Below are streams through shady orchards and rustling poplars - and you can see for miles from the downs.

We had two French girls, sisters of 19 and 16, in, badly gassed and one wounded. I took them to the French Civilian hospital at Abbeville the next day. They were such angels of goodness, blistered by mustard gas literally from head to foot, and breathing badly. They came from near Albert.

Fritz has made a horrid mess of Abbeville since we were there a month ago: 10 W.A.A.C.'s [Women's Auxiliary Army Corps] were killed at once one day.

Sunday, June 16th. The hills are covered with waving corn, like watered silk in the wind, with deep crimson clover, and with fields of huge oxeye daisies, like moving sheets. To-day there is no sound of guns and it is all Peace and loveliness. All the worst patients are improving and the Colonel has come back from his leave. We are able to get fresh butter, milk from the cow, and eggs, from the farms about and generally fresh vegetables.

Monday, June 17th. Last night he was over us again and working up to his old form: he passed overhead flying very low a good deal from 11 p.m. The sky illuminations in this wide expanse on these occasions are lovely: searchlights, signals, flares and flashes. We had a busyish night with operations.

June 29th. We are still very busy with influenza [the start of the great influenza epidemic] and also some badly wounded. Jerry comes every night again and drops below the barrage: I think he gets low enough to see our huge Red Cross. Nearly all the wards are dug in about 5 feet and were much approved by the D.M.S. yesterday. There are four badly wounded officers who need a lot of looking after. The problem is to get the influenzas well enough to go back to the Line and yet have room for the new ones.


Tuesday, August 6th. For a week past the air has been thick with rumours of a Giant Push, of Divisions going back into the Line after only 24 hours out, of 1,000 Tanks massing in front of us, Cavalry pushing up, and for 5 nights running we heard troops passing through our village in the valley below to the number of 40,000. To-day two trains cleared us of all but the few unfit for travel, and to-night we have got the Hospital mobilised for Zero and every man to his station. As the 1st Cavalry Division was trotting by in the dark, the men calling cheerily, 'Keep an empty bed for me' or 'We're going to Berlin this time'.

Wednesday, August 7th. 11 p.m. Brilliant sun to-day, after the heavy rains for weeks past. We've had a long day of renewed preparations.

All is ready for Berlin. I'm hoping breathlessly that they hold back my leave to see this through.

Thursday, August 8th, or rather 4 a.m. August 9th. 20,000 prisoners, 20 kilometres, 200 guns, transport captured, bombs continually on the congested fleeing armies - and here on our side the men who've made this happen, and given their eyes, limbs, jaws and lives in doing so. It is an extraordinary jumble of a bigger feeling of Victory and the wicked piteous sacrifice of all these men.

I have 34 Sisters and the place is crawling with Surgeons but we want more stretcher bearers.

Saturday, August 10th, 10 p.m. By now we [the Allies] should be in Marchelepot again. It is fine to hear of our bridges at Péronne and Brie, that we knew and saw being built by Sappers, being bombed before he [the Germans] can get back over them. (The sky at the moment is like Piccadilly Circus, with our squadrons going over for their night's work.) The wounded, nearly all machine- gun bullets - very few shell wounds, as his guns are busy running away: very few walking wounded have come down compared to the last Battle - in fifties rather than hundreds at a time, but we have a lot of stretcher-cases. Of course, we are all up to our necks in dealing with them, with ten Teams.

There are great stories of a 15-inch gun mounted on a Railway, with two trains full of ammunition being taken. … We have a great many German wounded. For some never-failing reason the Orderlies and the men fall over each other trying to make the Jerries comfortable.

Must go round the Hospital now and then to bed. The Colonel tells me that nothing has come through yet, thank goodness, about my leave. He says he has written a letter to our H.Q. that would melt a heart of stone.

August 11th. Orders have come for me to 'proceed forthwith' to Boulogne for leave. That probably means that I shall not rejoin this Unit.


After returning from leave all Kate's letters home are written from two Base Hospitals until her resignation on 28 November 1918 in order to return home to look after her ailing father. Read more about her civilian life on the Life After War page.

Read more about Kate at kateluard.co.uk where there are more diary extracts.