The Abandoned Soldier was created as a sculpture for the TV programme Power To The People and more of this can be read on the Haslar Royal Naval Hospital page.


The sculptor of the statue was artist James Napier. It exists as a non-weatherproof resin as the moment. The purpose of the Project (www.theabandonedsoldier.com) is to raise awareness of the issues facing troops returning from conflict zones, but also to raise funds to have the statue cast in bronze so that it can be erected in a final resting place (ideally the National Memorial Arboretum, who are hosting the book launch on 6th November 2010). Miniature copies can be purchased from their website and profits will be donated to charities that help former soldiers.


The sculptor was modelled on Daniel Twiddy who was wounded in Basra by friendly fire in 2003 and sustained many injuries including facial wounds from shrapnel.

in the chapel at the National Memorial Arboretum on Saturday 6th November. 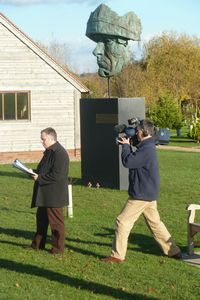 The project is a collaboration between the poet, and sculptor James Napier, to raise awareness of the issues facing British troops returning from areas of armed conflict. The statue is temporarily on display at the National Memorial Arboretum during November for the nation's period of Remembrance. 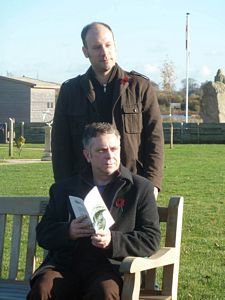 In 2010 the book was published by SilverWood Originals, an imprint of SilverWood Books at www.silverwoodbooks.com/originals. This new book of poetry aims to reignite debate and help those physically and mentally scarred in recent conflicts. This will be launched at the National Memorial Arboretum on November 6 2010.

The Abandoned Soldier: Reflections of War by Llandrindod Wells based Mark Christmas takes its name from the controversial statue which in 2007 was temporarily installed in a ‘guerilla action’ near Nelson’s Column in London. Mark Christmas, who is himself an ex-serviceman and Psychology student, says:

Abandonment is one of the worst words in the dictionary when you are involved with it in any context. Remember the dead, let the living not be forsaken in your memory.

The statue will be on display at the NMA leading up to the book launch, but it too faces an uncertain future. London based sculptor James Napier says:

The sculpture was cast in resin which is already deteriorating, and unless we can raise funds to have it bronzed, it will eventually simply fade away. The symbolism is tragic.

The project has been founded to raise the funds needed (approximately £75,000) to make the statue permanent. It is hoped that the project will become a rallying point for individuals and organisations involved with post-combat stress, homelessness and the many other issues affecting servicemen and ex-servicemen. A number of charities have already expressed interest in working with the project.

Power To The People


The Abandoned Soldier statue, modelled on the face of a British ex-soldier, was originally created for a 2007 BBC TV programme made by journalist Tim Samuels as part of the 3-part series ‘Power to the People’, which aimed to give a voice to various disenfranchised groups. ‘The Battle of Trafalgar Square’ saw a ‘platoon’ of ex-servicemen – many with shocking and moving stories to tell - install the striking sculpture in front of Nelson’s Column.

Now three years on, the statue which symbolises the forgotten servicemen of recent conflicts is in danger of itself being forgotten and falling into neglect. Eirwen Rogers, one of the organisers of the campaign to have it bronzed for posterity and permanently installed at the NMA, commented:

The motto of the National Memorial Arboretum is ‘where our nation remembers’ – and there is no question that we are very good at remembering our military dead. But there are an increasing number of ex-services personnel on the streets of the UK who we choose, as a society, to forget. These are all abandoned soldiers, sailors and airmen. A permanent reminder of their situation will serve as a prompt for our political leaders to support these people as they have promised to do so many times – but so often singularly failed to deliver.