Information about the QARANC collect prayer, the Corps Hymn and the AMS Prayer with the words


The following collect is a QARANC prayer said by the padre or speaker at Queen Alexandra's Royal Army Nursing Corps church events like Remembrance Day services or parades, at a QA corps personnel funeral, on Corps Day, at the annual Christmas Carol service or at the wedding of serving member of the QARANC. 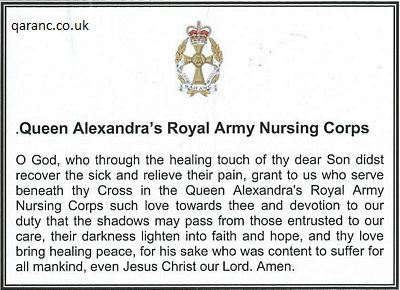 O God, who through the healing touch of thy dear Son didst recover the sick and relieve their pain, grant to us who serve beneath thy Cross in the Queen Alexandra's Royal Army Nursing Corps such love towards thee and devotion to our duty that the shadows may pass from those entrusted to our care, their darkness lighten into faith and hope, and thy love bring healing peace, for his sake who was content to suffer for all mankind, even Jesus Christ our Lord. Amen.


Mr David Blake AMA, the Museum Curator of the Museum of Army Chaplaincy, kindly researched that this was introduced for the QARANC from 24th January 1955. It was approved by Victor Joseph Pike Chaplain-General in 1955


The QARANC Corps Hymn is sung at events such as Corps Day:

O Father, by whose servants
Our Corps was built of old;
Whose hand hath crowned her children
With blessings manifold;
For thine unfailing mercies
Far shown along our way,
With all who passed before us
We praise Thy name today.