Information about the Duke of Connaught Unit at Musgrave Park Hospital, Belfast in Northern Ireland:


The Duke of Connaught Unit at Musgrave Park Hospital, Belfast in Northern Ireland replaced the military wards during the defence cuts and rationalisation reviews of the 1990s and the bombed building (see further below).

The Soldier Magazine of 19 February 1996 describes that the building was opened by Gen Sir Roger Wheeler, GOC HQ Northern Ireland. It included an operating theatre suite, casualty and resuscitation departments, physiotherapy, outpatients and administration departments as well as accommodation for two visiting families.

This new unit was named after the Duke of Connaught and Strathearn who was a Field Marshall and the first Colonel-in-Chief of the Royal Army Medical Corps and the Connaught Military Hospital in North Camp in Aldershot. This existed from 1898 to 1946.

The Duke of Connaught Unit Northern Ireland closed on the 28 March 2010. The close down team stayed until 30 June closing and emptying the whole unit before it was handed over to the NHS. This was the closure of the last military hospital in the UK.


Musgrave Park Hospital opened in 1920 and is now part of the Green Park Healthcare Trust. The Military Wing opened on the 21 October 1964 (cited in the book Sub Cruce Candida: A Celebration of One Hundred Years of Army Nursing

For decades there was a military unit run by the Royal Army Medical Corps (RAMC) and the QAs. This provided emergency care and long term care for members of the British Army.

Sister Kate: Nursing Through the Troubles

is a new book that may interest QAs and soldiers who served through the troubles in Ireland. Sister Kate O'Hanlan was a nurse at the Royal Victoria Hospital in Belfast during the Troubles. She worked in the Falls Road casualty department during the 1960 through to the late 1980s and her book, Sister Kate: Nursing Through The Troubles, gives accounts of dealing with survivors of bombs, shootings, stabbing and other acts of violence from both sides.

Sister Kate describes the treatment of soldiers injured in their Saracen vehicles, the Malvern Street Belfast shootings of 1966 and the start of the Troubles in 1969 which saw her treat her first gun shot wounds victim. This includes the bomb explosion by the UVF (Ulster Volunteer Force) at McGurk's bar which Sister Kate O'Hanlon attended and helped treat casualties at the scene before escorting them back to the casualty department to administer further nursing care to the survivors. This was her first experience of multiple trauma wounds and amputations. Many more were to be witnessed such as those from the IRA bombing of the Abercorn Restaurant off Cornmarket which was a retaliation for the events of Bloody Sunday at Derry.

The difficulties of caring for mass casualties is discussed in the chapter about the car bomb in Donegall Street which saw 150 casualties arrive at the A&E. Further traumas were to be encountered when body parts were handed for identification to Sister Kate O'Hanlon after the events of Bloody Friday. Personal safety of the nursing staff were encountered as a result of the riots of Long Kesh Internment Camp when prisoners were taken to the Royal Victoria Hospital Belfast and wives came looking for husbands and violence broke out. Such violence even extended to shootings outside the hospital and even incidences in the resuscitation room.

New methods of nursing care were soon developed and the Royal Victoria Hospital Belfast soon became know as a centre of excellence and this included treatment of victims of rubber bullets, plastic baton rounds, paramilitary punishments such as tarring and feathering or drilled knee caps. 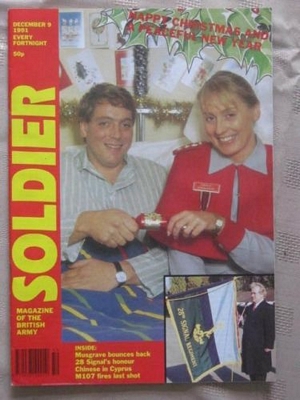 This photo of the cover of Soldier Magazine December 1991 is reproduced here with kind permission of www.soldiermagazine.co.uk


At the height of the IRA troubles in Northern Ireland (NI) the RAMC unit was bombed by the Provisional Irish Republican Army (PIRA) on the 2 November 1991 at approximately 2:35pm. The unit was busier than normal because some off duty staff were watching the Rugby World Cup Final. These included medical, nursing and administration staff. There were thirteen patients in the wing.

The bomb killed one member of the RAMC (WO2 Philip Arthur Cross) and one member of the RCT (Driver Craig Pantry) and injured 9 members of the Army Medical Services (AMS), a five year old girl and a four month old baby. The bomb contained 20 lb of Semtex which exploded in a service tunnel which connected the Withers block to the RAMC Ward. The Withers block housed the children's ward and the orthopaedic ward. The Soldier Magazine of 19 February 1996 cites this as having been built in 1962 and was a 58 bed wing. In addition to destroying this wing the blast also destroyed the operating theatre, casualty, the resuscitation room and outpatients. There is a photo of the bombed building in the book Sub Cruce Candida: A Celebration of One Hundred Years of Army Nursing

which was taken by Soldier Magazine. The same edition of Soldier Magazine cites that "a statement was later issued by the IRA saying their target was not a hospital but a military installation."

It continued to explain: "Disruption was limited to the loss of just one day of routine clinics and two days of medical boards, although damage to the wing meant that the admin corridor had to be evacuated while the affected area was rebuilt."

A mobile operating theatre was set up until repairs were carried out.

A commemorative stone was laid on 19 June 1998 by the staff of The Duke of Connaught Unit, Musgrave Park Hospital in memory of WO2 P Cross (RAMC) and Dvr C Pantry (RCT).

is a collection of narratives from nurses across Northern Ireland who worked during the Troubles. It includes the bombing of Musgrave Park Hospital.


If you have any information or a photograph of the Duke of Connaught Unit for this page then please contact me.