Ambulance Flotilla: British hospital barges on the River Seine 1915 compiles the collection of photos, official documentation, postcards and a letter home from Queen Alexandra's Imperial Military Nursing Service Reserve Sister and Acting Matron Kate Read Associate Royal Red Cross. It has been lovingly edited by her granddaughter Anne Penny and is the finest example of images from this era where patients were transported through France by Hospital Barges. By publishing this book she has made accessing these historic photos from the Great War so much easier and has given readers a valuable insight into life on-board from the nurse's perspective. 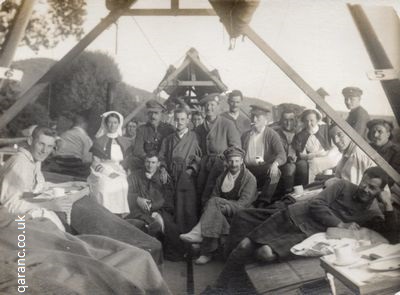 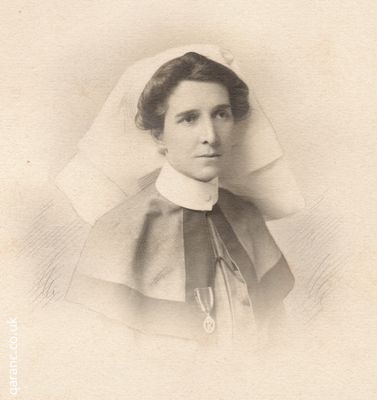 Anne has collated information to recount the story of one round trip by No. 1 Ambulance Flotilla on the River Seine made during June 1915. Not an easy task given that only one letter home exists. However Anne has extracted information from Acting Matron's Read's own notes on postcards and on the back of her photos. The journey takes the reader from Le Havre through Rouen to pick up the wounded near Paris, and finally back downriver to the boats where their 'Blighty Tickets' pinned to their chest would grant them transport home on hospital ships. This flotilla consisted of six grey barges joined together and pulled by a tug. They were requisitioned by the War Office from France and Belgium and were previously used to transport cargo such as coal. The Royal Engineers transformed them into workable hospitals wards with an operating theatre and rooms for the staff to rest and sleep during these long journeys. This transported 150 patients. The numerous photos demonstrate clearly the ward lay outs, beds, gramophone, coal stoves, laundry baskets, etc as well as areas like the kitchen. 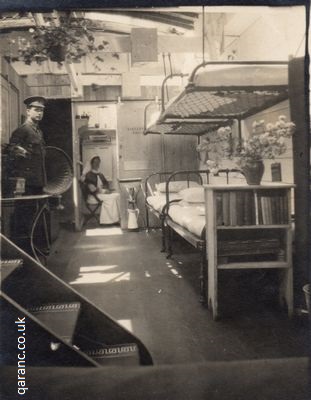 Visited the new water ambulance…It is well thought out and has been expensively equipped, but the beds are too close together and I am sure there will be much difficulty in nursing seriously ill or wounded men. I think the beds will have to be reduced or the smaller bed substituted for those at present supplied.

It is worth the price of the book alone just to view some super pictures of Acting Matron Read in her uniforms, most of which demonstrate her wearing the red cuffs of that title. Group photos also depict the uniforms of other QAs, as well as Royal Army Medical Corps doctors and orderlies as well as Sisters of the Territorial Force Nursing Service (TFNS). Other RAMC photos worth mentioning are of them carrying patients on stretchers over the gangplank and onto the deck and transferring them below stairs and onto their beds.

Something I have never seen before in my research over the years and which delighted me in reading Ambulance Flotilla was seeing a QA walking the central gangway, a nerve wracking journey, which joined each barges and allowed staff access to the other wards, stores, etc. Acting Matron Read makes it look effortless!

There was time in these long journeys for staff and patients to take in the French countryside. For the patients this was usually confined to being helped onto deck. Most had head or chest injuries and were transported by this means to help reduce further injury. But for the QAs this could often mean a rare outing and a chance to unwind. Here's an extract from Kate's letter home describing a picnic:

…we all walked along a hot dusty road to Lillebonne (about 5 miles) carried our lunch and bought drink when we got there. You should have seen some of us walking through the village street carrying syphon in one hand and a bottle of white wine in the other! We had our lunch amongst the remains of an old Roman theatre.

The book shows a delightful group of QAs dressed in their capes, veils and long grey dresses in the overgrown field. Other recreational photos whilst wearing the Grey and Scarlet uniforms include taking afternoon tea. More extracts from the letter home describes the night sisters getting potatoes from locals. 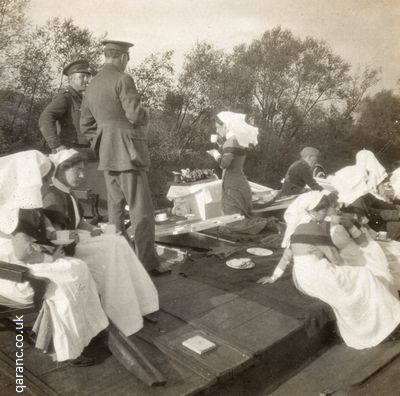 More photos depict the various ports and locks that the flotilla navigated as well as various day to day activities such as the raised awnings to offer protection from the rain or sunshine and an RAMC orderly operating a spin-dryer to dry the washing. Kate's letter reads:

The heat down below has been terrific, but we have been able to leave a number of the patients on deck all through the storms under the awnings, and also leave several hatchways off.

I would urge anyone with an interest in how wounded soldiers were evacuated through France or with an interest in military nursing history to buy this book to see more fine examples of photos and to read Kate's full letter home along with French newspaper clippings which give further insight into life on-board. Those with an interest in civilian nursing history will equally find this book fascinating when they read about her nurse training at Edinburgh Royal Infirmary from 1902 to 1905. It includes a copy of Kate's Certificate from the Infirmary's School of Nursing with transcription of how she achieved it. Later chapters describe her life working at the Royal Free Hospital in London as a Casualty Sister and her first involvement with the military when she volunteered for the Princess Christian's Army Nursing Reserve and includes appointment certificate to the PCANR and then transfer to the QAIMNSR.

I love that the book ends on a happy note. Kate writes a letter to the Matron-in-Chief, Miss E.H.Becher a month after leaving the Services to get wed. She requests permission to marry her fiancée, a Chaplain, whilst wearing her uniform. Permission is granted in a touching letter thanking her for her service. Copies of these are included beside a charming photo of Kate with her husband, both in their Frist World War Uniforms.

The Kate Read collection is held at the Army Medical Services Museum in Ash Vale, a stunning 167pictures.