Princess Christian, the third daughter of Queen Victoria took an interest in military nursing and formed the Princess Christian's Army Nursing Reserve in 1897. Two years later they proved their worth in the Second Boer War (The South African War or Anglo-Boer War) from 1899 to 1902.
There is an example of the medal roll for several of the nursing sisters on the Lady Superintendent Louise Margaret Hospital Aldershot page.

The Princess Christian's Army Nursing Reserve were disbanded in 1907 and members became part of the Queen Alexandra's Imperial Military Nursing Service Reserve whose abbreviation was QAIMNS(R).

Below is a Carte de visite (19th Century small photograph used as a visiting card) of an unknown PCANR taken in Aldershot by a photographer with the surname Elliott. We don't know anything else but if you can please help with more information please contact us. 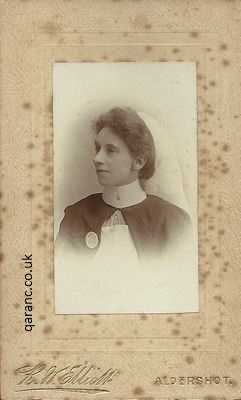 Thanks to Peters Nursing Collectables for the image.

has photo of nurses of the Princess Christian's Army Nursing Reserve in South Africa.

More History of Army Nursing and the QA's.