The first Colonel-in-Chief of the QARANC was Her Majesty Queen Mary in 1949. Before this she was the President of the Queen Alexandra's Imperial Military Nursing Service (QAIMNS) and the QAIMNS(R) the Queen Alexandra's Imperial Military Nursing Service Reserves which was the earlier British army nursing service. When the new nursing corps was formed Her Majesty Queen Mary retained her position which was renamed from President to Colonel-in-Chief to reflect the new corps status.


As President of the QAIMNS Her Majesty Queen Mary wrote the forward to Grey and scarlet : letters from the war areas by army sisters on active service

has a collection of paintings and photographs of the Presidents and Colonels in Chief of the QAIMNS and QARANC.

In November 1950 the Nurses Memorial Chapel in the Jesus Chapel in Westminster Abbey was unveiled and dedicated in a ceremony with Queen Mary in attendance. The Dean of Westminster dedicated the Chapel to the Glory of God (cited in the book Queen Alexandra's Royal Army Nursing Corps (Famous Regts. S)


Her Majesty Queen Mary held the post of Colonel-in-Chief until she passed away on 24 March 1953. As is normal procedure, after a suitable period had lapsed, HM Queen Elizabeth appointed her sister, Her Royal Highness The Princess Margaret (later Countess of Snowdon), as Colonel in Chief. This became effective on 28 September 1954 and she held that post until her death on 9 February 2002.

Her Royal Highness Princess Margaret the Colonel-in-Chief of the QARANC can be seen on the left of the photo below during an official engagement. 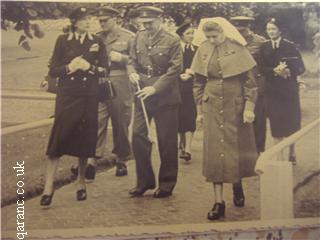 
Twelve QAs were given the honour of attending the wedding of their Colonel in Chief Princess Margaret to Mr Antony Armstrong-Jones on the 6 May 1960. This included the Director Army Nursing Services (DANS) and Matron-in-Chief (Army) Dame Monica Johnson and the Colonel Commandant Dame Helen Gillespie. The Corps wedding gift was a pair of 1829 meat dishes and a pair of 1816 silver sauceboats. The QA Association gave their Patron the gift of a Coalport tea service and a set of silver and enamel teaspoons. 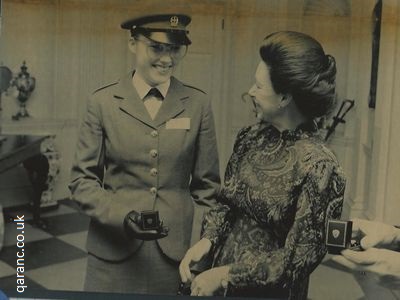 After the loyal toast on dinner nights, Princess Margaret received a separate musical toast. Below is the piano transcription of this melody and clicking it gives you a larger pdf copy. Does anyone recognize it? It is possibly a folk tune, but confirmation would be valued. When HRH The Countess of Wessex became Colonel-in-Chief, her toast is made in response to the first eight bars of the National Anthem (with thanks to Terry Hissey and Roger Hewitt for the transcription). 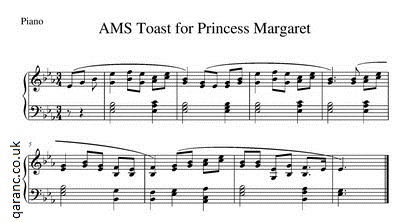 HRH The Countess of Wessex

The third and current Colonel-in-Chief of the QARANC is HRH The Countess of Wessex (Sophie Wessex). She took over the role on the 1 July 2003.

The picture to the left shows HRH The Countess of Wessex cutting the QA Association 60th anniversary cake.


The Countess of Wessex is also the Patron of the Queen Alexandra’s Royal Army Nursing Corps Association.

What Is A Colonel-In-Chief?


Each regiment and most corps of the British army have their own Colonel-In-Chief. The role is usually filled by a member of the Royal Family.


The Roles Of A Colonel-In-Chief

The Colonel-in-Chief is as the Patron of the QA Association.

From 1926 until 1949 the President of the QAIMNS and the Territorial Army Nursing Service (TANS) was Her Majesty Queen Mary, the daughter in law of Queen Alexandria. She was also the Commandant in Chief of the newly formed QARANC from 1949 to 1950 and then became the Colonel in Chief until 1953.