Dunham Massey, like many Georgian Houses, became a temporarily military hospital during the Great War to cope with the needs of the multitude of wounded soldiers returning from the Front. It was known as the Stamford Military Hospital and was run by Lady Stamford whose son Roger, the 10th Earl, was an aide-de-camp to General Lloyd, the Commander of London District. She was assisted by Nursing Sister Bennett. The visiting doctor was Dr Cooper who used the Grand Staircase as an operating theatre.

The Stamford Military Hospital main ward in 1917, which the soldiers referred to as Bagdad Ward: 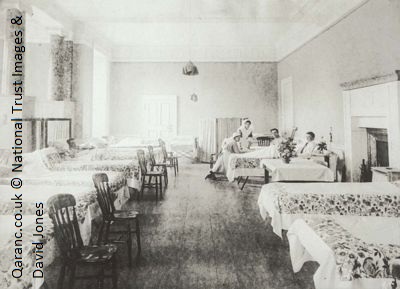 The centenary year of the First World War is remembered by the National Trust, who now owns the property, by turning several rooms back into a WWI Hospital. This includes a ward, operating theatre and recreation room. It operated from 1917 to 1919 and cared for 282 wounded soldiers whilst staying a family home for his extended family including his mother and sister, Lady Jane, who nursed on the wards. 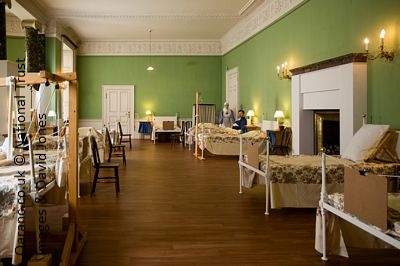 
The Saloon as it usually looks before it was transformed into Bagdad Ward: 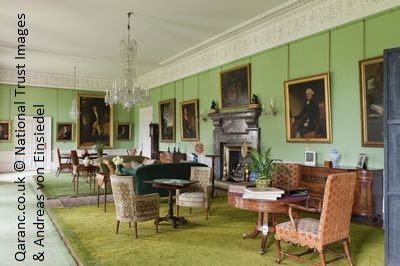 The beautiful gardens aided convalescence and recovery where the Tommies were able to play croquet, just relax in the courtyard or fish, swim and row in the moat.

Wounds treated included amputations and head wounds and there was a TB unit in a quarantine hut in the grounds.

Qaranc.co.uk would like to thank National Trust Images, David Jones and Andreas von Einsiedel for kind permission to use their photographs.

If you would like to contribute any info or photographs of Stamford Military Hospital then please contact me.