Kate Luard joined the Reserve of Queen Alexandra's Imperial Military Nursing Service (QAIMNSR) on 6 August 1914, two days after the British Government declared war on Germany, and sailed for France on 18 August. She served on ambulance trains until she was one of the first nurses to be posted to a front-line unit, No.4 Field Ambulance. She was then sister in charge of a number of casualty clearing stations until, on the 3 March 1917, she arrived in Warlencourt, a Camp about six miles from the Front behind Gommecourt, where she was responsible for setting up a casualty clearing station in preparation for receiving the wounded from a British offensive which was to become the Battle of Arras (9 April - 16 May 1917). This battle cost nearly 160,000 British and almost 125,000 German casualties. 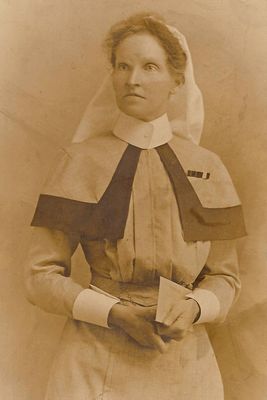 As Sister-in-Charge she organised the lay-out and supplies. This was achieved in difficult and bitterly cold conditions against the background of shells and guns close by. Eventually ready to receive the wounded she describes how the group of casualty clearing stations alternate in taking in the casualties and the worst cases are evacuated by ambulance trains. Conditions were still primitive and the harsh weather continued...

At last we've taken in our first convoy. The two new Sisters arrived in the nick of time. It has been the usual poisonous weather again, biting N.E. wind, driving storms and deep slush. We take in from 6 a.m. to-day to 6 a.m. to-morrow - in rotation with the other two [casualty clearing stations] in this group.

We are bombarding them harder than ever; it is a continual din. We took in another Convoy in the night and had a busy morning, but the train came before tea, so our first venture is admitted, operated on, treated and evacuated within 36 hours; all but the worst Surgicals and Medicals unfit for travel, and a handful of walking cases, soon fit for duty. I've already had to begin writing the Break-the-News Letters to the wives and mothers.

We are in the middle of terrific work, so I can't write much; all the casualties from the attack on Hainy and Croisilles came to us, we hadn't nearly enough Sisters to go round and it never stopped all day and all night. So many die that I shan't possibly be able to write to their mothers, and some have no trace of next of kin.

The increased Mess makes extra work and catering is appallingly difficult. We all eat whatever comes, whether cold or hot, raw or cooked, nice or nasty, and do very well on it. The kitchen range is made of petrol tins, cement, and draughts. 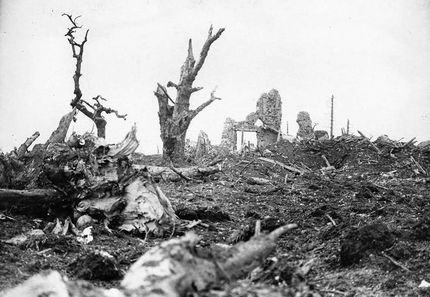 Battle of Arras - ruins at Gommecourt.

Just got to bed after my last round. Had a very big take-in; a Gunner Major with his leg off nearly died this morning, but I hope he'll do now. A boy with his right leg off nearly at the hip, and his right arm all in pieces, is not so well to-night. I found three dying ones on stretchers to-night on one of the wards, two died but one revived and still lives.

[On arrival] all the layers of sodden or caked stiff clothing are cut off, pyjamas or long flannel pinafore gowns put on, taken from a blanket and screen enclosure kept heated by a Perfection Lamp. Hot blankets, hot-water bottles, hot drinks, subcutaneous salines and hypodermics are given here.

A man with his right arm in fragments, a penetrating chest-wound and a piece of shrapnel in his abdomen, said he was 'a bit uncomfortable, but nothing to talk about'. After six hours we had him fit for operation; they whipped off his arm and dug the shrapnel out of his inside: now he's in bed with a pulse (died next day).

A boy with his face nearly in half, who couldn't talk, and whom I was feeding, was trying to explain that he was lying on something hard in his trouser pocket. It was a live Mills bomb! I extracted it with some care, as the pins catch easily.

The 3rd Army went over the top yesterday and a wire came through by mid-day that we'd taken Vimy and 4000 prisoners and 30 guns. The Cavalry are after them, and the Tanks leading the Infantry, and all is splendid, but here are horrors all day and all night. The three C.C. S.'s filled up in turn and each then filled up again, without any break in the Convoys: we take in and evacuate at the same time.

Stretchers on the floor are back-breaking work, and one's feet give out after a certain time, but as long as one's head and nerves hold out, nothing else matters.

Evacuation has been held up to-day for some hours and the place is clogged. The wards are like battlefields, with battered wrecks in every bed and on stretchers between the beds and down the middles. We take in to-night, but there are two trains in to clear.

The transport of the wounded is extraordinarily well worked out. The walking-cases come in lorries and the lying-cases in electric-lighted Motor Ambulances, which look like lights on the Embankment as far as you can see down the road.

Earlier extracts from Kate's war diary reveals the living conditions she and other nurses experienced:

Then you come to what was Gommecourt. It must have been, when it existed, full of orchards, and half in and half out of a wood. Now there is one wall of one house left. The woods and orchards are blackened spikes sticking out of what looks now like a mad confusion of deep trenches and deep dugouts battered to bits. On the right of this wood, the other side of the Germans' wire, is the No-Man's Land, where the Salvage men are busy burying our skeletons who have been there since July.

The D.M.S [Director of Medical Services] was very pleased with the hospital yesterday, especially with our arrangement of the Dressing Ward.

The Quarter-Master paddled me round all his soak-pits, incinerators, thresh disinfectors, ablution huts, bath huts, laundry etc., etc., this morning. They are primitive but clever. 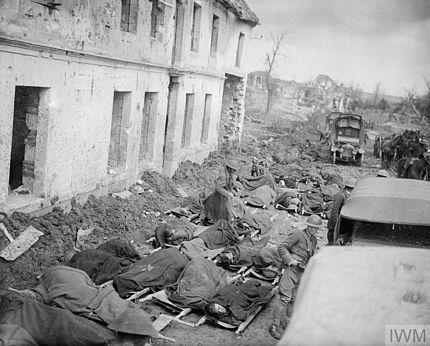 The D.M.S. came to-day and said the Push was held up by this extraordinarily inopportune burst of bad weather. It blew and raged all Wednesday night, and there was deep snow in the morning. Last night and to-day, we have been getting the poor boys in who have been lying out in it for two days, and many of them have died since of the exposure and gas gangrene.

The Strafe is over for the moment: the most tragic part, though - dozens who have been evacuated will die, too.

We've had a very busy day, some of it very disheartening: the work in the Wards, cutting off the caked khaki and the clammy socks and heavy boots, and the everlasting saline infusion and men being sick or delirious or groaning or haemorrhaging.

It poured and galed all last night and most of to-day with the usual alternations of heavy rain, snow and sleet, with a driving bitter wind. What the men in the trenches, and the wounded are like you can imagine. I have never seen anything like the state they are in, mud caked on their teeth and under their eyelids.

This continued bombardment is shaking the earth tonight. I took some Lent lilies to the Cemetery this evening; it is rapidly spreading over a high open field; there must be nearly 2,000 graves there now.

No one knows when we shall fill up again but it can't be far off, with this din.

The 2nd phase of the Battle of Arras began on April 23rd 1917 and her diary extracts can be read on the Warlencourt Casualty Clearing Station page.

Read more about Kate at kateluard.co.uk