The photograph below shows the two medals awarded to Sydney Claude Stroud of the London Regiment who served in the Great War until wounded at the Battle of the Somme in 1916. 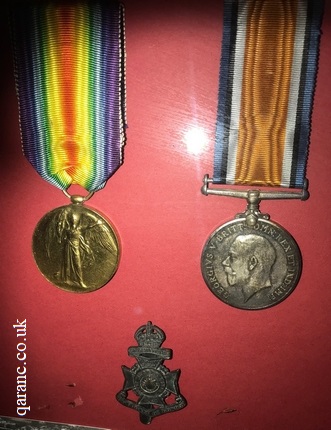 The medal on the right is the British War Medal. The front (obverse) has the face of King George V and along the edge has the words GEORGIVS V BRITT: OMN: REX ET IND: IMP which translated from the Latin means George V King of all the British Isles and Emperor of India.

There is a photo of the reverse on the British War Medal World War One page.


The other of the WWI medals, on the left, is the Victory Medal and the cap badge is of his London Regiment.

Read more about Sydney Claude Stroud and see postcards and photos from his collection on the pages of: