This photograph of the silver British War Medal, struck by the Royal Mint, shows the rear of the medal which was awarded to officers and junior ranks of the Navy, Army and Air Force who served during World War One. 6,500,000 were awarded. 110,000 bronze British War Medals were awarded to the Chinese, Maltese and Indian Labour Corps. 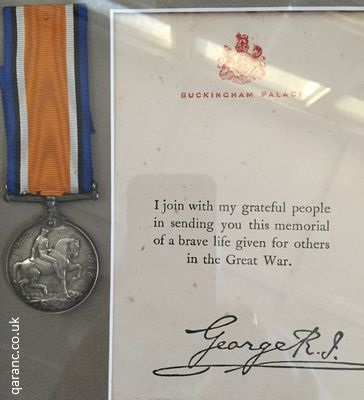 It was established on the 26th July 1919 and this British War Medal was awarded to Staff Nurse Ella Kate Cooke of the Queen Alexandra's Imperial Military Nursing Service (Reserve), QAIMNS(R), and presented to her family after her death, in service, in 1917.

The obverse depicts King George V and an example can be seen on the WWI Medals page, whilst the rear, as shown above, depicts Saint George riding naked on horseback with the years 1914 and 1918.

The silk ribbon is royal blue band, black band, white band and a wider orange band, and then reversed.

It was nicknamed Squeak after the cartoon characters Pip, Squeak and Wilfred. The medal nicknamed Pip is the 1914-1915 Star and Wilfred being the Victory Medal.

The letter, from King George V, from Buckingham Palace reads:

I join with my grateful people in sending you this memorial of a brave life given for others in the Great War.

See also her First World War Commemorative Next of Kin Memorial Scroll and Letter from King George from Buckingham Palace.