This World War One Commemorative Next of Kin Memorial Scroll and Letter was awarded to Staff Nurse Ella Kate Cooke of the Queen Alexandra's Imperial Military Nursing Service (Reserve). It was presented to her family from King George V from Buckingham Palace after her death, in service, in 1917. 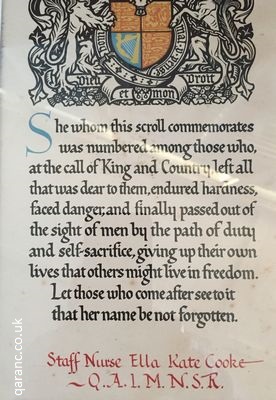 She whom this scroll commemorates was numbered among those who, at the call of the King and Country, left all that was dear to them, endured hardness, faced danger, and finally passed out of the sight of men by the path of duty and self-sacrifice, giving up their own lives that others may live in freedom. Let those who come after see to it that her name is not forgotten. Staff Nurse Ella Kate Cooke QAIMNSR

It would have been accompanied by a small bronze plaque.

Read the biography of Staff Nurse Ella Kate Cooke and see a photo of her British War Medal.