This photograph is from the collection of QA Helen Lucy Gibbs and shows the staff and patients of Stanford Road War Hospital on the 11th November 1918, taken especially for the World War One Armistice. 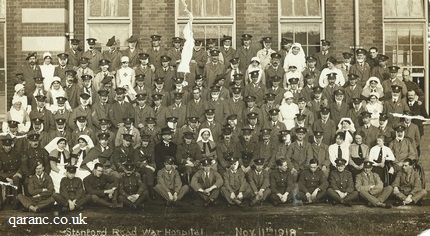 The photographer was C. Harrison Price, Studios, 36 George Street, Croydon. The rear has space for a stamp and is Post Card formatted.

Her aunty, Bertha Mary Chubb, who was also a member of the QAIMNS, also worked there.