Sister Katy Beaufoy has the distinction of serving in two wars and serving in the Princess Christian's Army Nursing Service and then the Queen Alexandra's Imperial Military Nursing Service Reserve. She was one of six nurses to be sent to the Second Boer War along with Dame Maud McCarthy. Years later she then volunteered for the QAIMNS(R) and was a Nursing Sister and then Matron in His Majesty's Hospital Ships. Matron At War by Erica Nadin-Snelling tells her remarkable story through family and official records, letters home and her war diaries. 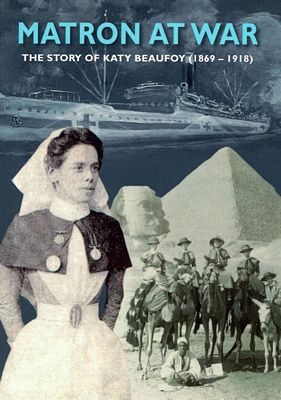 She volunteered for the Second Boer War and a copy of her letters home from the 18 General Hospital, Charlestown, Natal are included in the book. When the Princess Christian's Army Nursing Service was formed into the Queen Alexandra's Imperial Military Nursing Service in 1902 she applied to the Reserve several years later in 1908. In the meantime she had an active nursing career as theatre sister to a private surgeon then as a nurse tutor in Italy training local nurses.

On the 17 August 1914 she volunteered for war service and was sent to Devonport Military Hospital and then to No 15 General Hospital in the former Abbasieh School at Alexandria. She then nursed aboard the Hospital Ship Dover Castle as Sister and the 29th General Hospital in Malta before being promoted to Matron. Her diaries from this period are transcribed into the book, as is her time approaching her appointment as Matron to the Hospital Ship Glenart Castle.

During reading of her war diaries we learn snippets of valuable information, such as her salary being £75 per annum, though she queried this with the Matron In Chief as it should have been £85. This extract demonstrates the dangers they faced on a daily basis:

While an ambulance bringing the Sisters from the schools (attached to 19 G. Hosp) to lunch, it was dashed into by an express. One Sister (Griffiths, Res.) was killed, the driver and 2 Sisters unconscious, one of the latter, Cavanagh, having her arm broken and head cut, also eye injured, several were badly shaken. The one who was killed saw the express coming, jumped out, called to the others and helped them out, then ran round to help those on the front with the driver. They seem stupefied, however she got Hollows down and was pulling Cavanagh down when she met her death.

Readers also learn about the culture, customs and everyday living of the places she visited off and on duty. She and her colleagues certainly made the most of her career as the delightful photo of five QA Sisters mounted on camels and a donkey in front of the Sphinx in Egypt shows.

Other entries describe the patients and numbers taken aboard for transfer and the dangers of life at sea, giving a rare insight to this aspect of military nursing during the Great War.

Sadly Sister Beaufoy was lost at sea, believed drowned when HMHS Glenart Castle, despite showing the lit Red Crosses and painted white with green stripe on the sides, was torpedoed by German submarine UC56 on the 26 February 1918. She was making her way down the Bristol Channel on her way without passengers bound for France.

Matron At War has been compiled by cousins telling the story of their Great Aunt and is a moving tribute to her service life. They were instrumental in having a memorial erected at Hartland Point on the anniversary of the sinking in 2002. Photographs and details of the dedication are included along with first-hand accounts of survivors and witnesses given at the Admiralty Court of Inquiry held on 27 February 1918. The most poignant group of photos for me is her collection of medals, such as the South African War Medal and her Princess Christian's Army Nursing Service badge. Like Matron Beaufoy and her last days of her diary after a spell of home leave her QAIMNS(R) medal is missing, lost at sea.

This moving family book concludes with a trench report from family members of Katy making this of great interest to readers with an interest in frontline war as well as those who care for the injured and sick from immediate conflict. It is a must for anyone with an interest in military nursing and a rare and valuable insight of a Matron aboard a hospital ship.

Buy for &pound10 plus P&P from

This Nursing Board Minutes (WO243/21) with their reasons for rejection was kindly sent by Sue Light of Scarlet Finders which shows that her April 1903 application to the regulars was rejected because “Social status not what is required”. However as the Great War progressed and there was a need for more military nurses she was accepted to the Reserves. 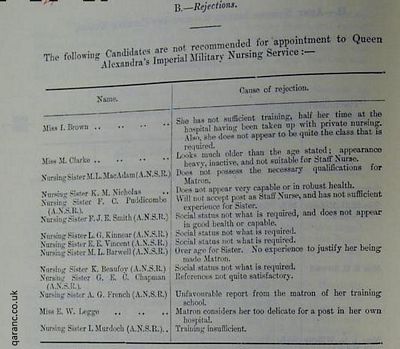