The QA Corps Warrant can be seen in the image below: 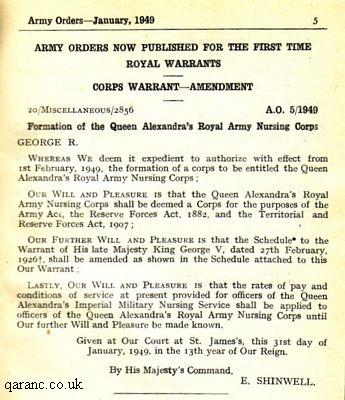 Whereas We deem it expedient to authorize with effect from 1st February 1949, the formation of a corps to be entitled the Queen Alexandra's Royal Army Nursing Corps:

OUR FURTHER WILL AND PLEASURE is that the Schedule to the Warrant of His late Majesty King George V, dated 27th February, 1926, shall be amended as shown in the Schedule attached to this Our Warrant:

By His Majesty's Command,