Pictured is a page written and drawn by Private Lamont of the Cameronians during World War One. The drawing is of the regimental cap badge and the writing says: 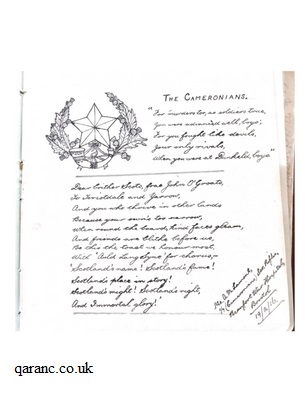 "For murders too, as soldiers true
you were advanced well boys;
For you fought like devils,
your only rivals,
when you were at Dunkeld boys."

Dear brither Scots, frae John O'Groats, to Teviotdale to Yarrow, and you who thrive in other lands because your own's too narrow, when round the board, kind faces gleam and friends are blithe before us, be this the toast we honour most, with 'Auld Lang Syne' for chorus, -
'Scotland's name! Scotland's fame!
Scotland's might! Scotland's right!
and Immortal glory!'


It is from the Autograph Book of Margaret McKay McKenzie, a nurse from World War One who served overseas and at the home front.