In this example of a Voluntary Aid Detachments Notice To Join (VAD Form 8) you can see the mobilization order to Royal Victoria Hospital Netley during World War Two. 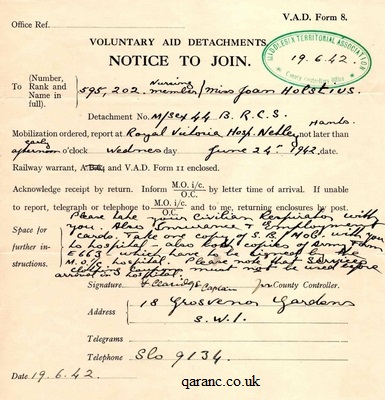 It is from the collection of Joan Holstius who was nursing member Number 595202.

Her joining instructions included taking her civilian respirator, employment cards and copies of Army Form E663. She was instructed not to use service clothing coupons until arrival at the hospital.

The instructions were signed on behalf of the County Controller.

Read more about the: