This postcard is a fine example of the pier at Netley Royal Victoria Military Hospital with First World War patients in their hospital blues. 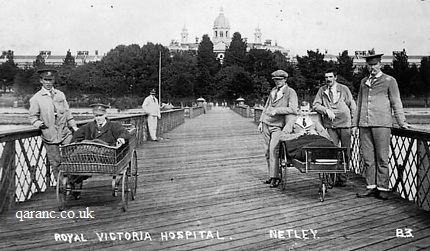 It is from the collection of author Jill Bruce whose grandfather was a patient there. His wife was sent an Army Form B104 82 Letter of Condolence from the King WWI in error and days later was asked to send it back when he was found alive and wounded.

Visit Jill's website at www.jillbbruce.com.au which has details of her recent non-fiction work, Anzac Day, which describes the wars in which Australian and New Zealand forces have deployed.