Photographs and history of George Main who served with the Gordon Highlanders in World War Two in Malaya and was a Prisoner of War of the Japanese:

This page is dedicated to George Main who served with the Gordon Highlanders in WW2 and was the grandfather of the author of qaranc.co.uk

The Gordon Highlander soldier on the left in the photo below is George Main. He was born on the 12 April 1915. 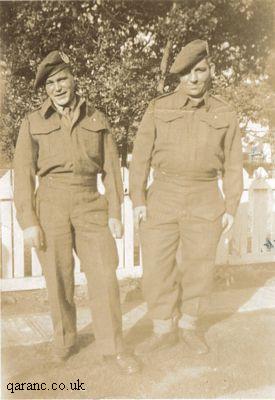 
The service number for Private George Main was 2885767. He enlisted at Aberdeen on the 18 April 1940 to the 2nd Battalion Gordon Highlanders. During World War Two he served in Malaya from the 5 August 1940 before becoming a Prisoner of War Far East, being listed as missing on the 15 February 1942, listed as Y List POW on December 1945 and discharged medically unfit for further service due to his Prisoner of War experiences at the hands of the Japanese for 1290 days, being released on the 1 December 1945.


Read more about the Gordon Highlanders Far East Prisoners of War in The Forgotten Highlander: My Incredible Story of Survival During the War in the Far East

and Surviving the Sword: Prisoners of the Japanese 1942-45


The photo below was taken at a WW2 Japanese Prisoner of War Camp in October 1944 at Hakodate POW Camp, Hokaido, Japan. The back of the photograph has Japanese lettering. Private George Main is fourth from the left on the front row. 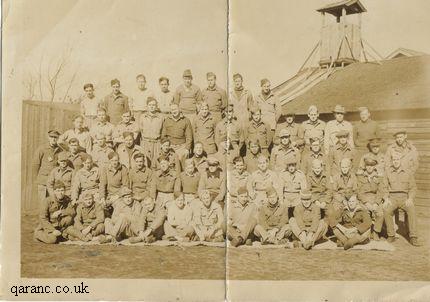 Paul Carter, whose father was a POW there, has published Survival of the Fittest: A Young Englishman's Struggle as a Prisoner of War in Java and Japan

. He told us that four or five group photos were taken on the same day and his father appears in one of these. All have the same hut as the backdrop. His father wrote the date 29 October 1944 on his photo. The Japanese date stamp 19.12.23 is on the back - this is 23 December 1944 (1944 being the 19th year of the emperor) so perhaps the photos were given to the POWs at Christmas. His father survived 3½ years as a POW, first in Java where he was captured, then in Hakodate & Bibai on Japan's northernmost island of Hokkaido. Some years later, Alan Carter wrote about his experiences and, following his death in 2010, his son Paul typed up his handwritten manuscript (adding maps & photos) and turned it into a book dedicated to his father's memory.

More photos and information about Hakodate POW camp can be found at www.cofepow.org.uk which includes thoughts that the photos were taken for propaganda reasons perhaps prior to a Red Cross visit.


Scattered Under The Rising Sun

Scattered Under the Rising Sun: The Gordon Highlanders in the Far East 1941-1945

documents the story of all of the men of the 2nd Battalion Gordon Highlander from their time in Singapore and being made Far East Prisoners of War by the invading Japanese Army. Every member of the Gordon’s who served during this tumultuous era is listed along with a photo of about 70% of them. Tales of courage and selflessness during the harsh treatment by the Japanese are included in Scattered Under the Rising Sun which has been written by Gordon Highlanders Museum researcher Stewart Mitchell. This is a must for anyone with an interest in this North East of Scotland regiment.

Scattered Under the Rising Sun: The Gordon Highlanders in the Far East 1941-1945 covers the move to the new Selarang Barracks in the Changi area of Singapore Island in 1937 and describes the idyll social life, sports and military exercises and training of the Gordon’s. With the imminent war looming new conscription rules were passed in the National Service (Armed Forces) Act 1939 which would have affected George Main and his friend Alexander (Sonny) Stewart from Aberdeen who were conscripted in 1940. The first conscripted men of the Gordon Highlanders during the Second World War were posted to the 2nd Battalion at Selarang Barracks in Singapore. They were mobilised by train from Aberdeen to Liverpool then sailed on MV Batory in August 1940 arriving on 15 November 1941.

When the threat of an invasion by the Japanese grew the 2nd Battalion Gordon Highlanders moved on the 1 December 1941 to Pengerang, across the Straits of Johore, to guard artillery installations and strengthen the defences. The families were evacuation home to Britain on the 20 January 1942 aboard the Duchess of Bedford amid an air raid. They arrived safely at Liverpool Port on the 2 April 1942. The men remained as part of the Singapore Garrison Force.

The British surrendered at 8:30pm on the 15 February 1942. The Gordon Highlanders were marched 14 miles to a Prisoner of War camp in the Changi area. They were immediately put to work clearing roads and area damaged by air raids and fighting, unloading cargo from ships and even clearing mine which resulted in several casualties and deaths. Other Gordon Highlanders were transferred to camps at Havelock Road, Adams Road, Sine Road and Normanton. From here the Gordon Highlander POW’s were moved, often by forced march or packed in train wagons or in the holds of hell ships, throughout South East Asia and used as forced labour. This included working in copper mines, building airfields and building the infamous Burma railway. The soldiers received little food and conditions were dire. This is described in much more detail in Scattered Under the Rising Sun: The Gordon Highlanders in the Far East 1941-1945


Like many Gordon Highlanders WW2 FEPOW soldiers George Main told his family little of his time at the hands of the soldiers of Japan. He did tell his daughter that he was lucky to be alive because they were coarse and ill treated the British soldiers at every opportunity. He was close to death once after a Japanese soldier threw a pick axe at his back and he received terrible injuries. He recalled this leading to a near death experience and seeing his mother. His wounds took a long time to heal in the harsh conditions of the prison camp with little medical care, drug and dressings. 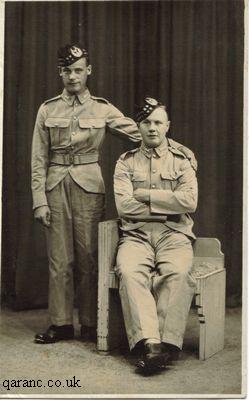 After his release from the WW2 POW camp he was taken to BMH Singapore for nursing care and medical treatment where his wounds and malnourished state were treated. He was then taken to special military camps in America and Canada to recuperate. Many thought at the time that FEPOW's were not returned to the UK quickly because their skeletal appearance would have been bad propaganda. The reality was that they needed to recover physically and emotionally from their cruel treatments in the camps. Many would not have survived the long journey home by sea without this valuable recuperation period. To demonstrate just how long this took Private George Main was not discharged from the army until February 1946 and still suffered health problems from his time as a Far East Prisoner of War. 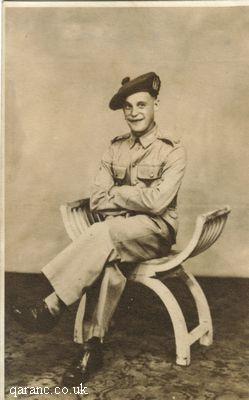 His soldier's release book class "A" registration was PTH/DIV/V SR 1623.

His release papers were dated 16 Feb 1946 at Perth and Unit given as Y List POW. His military conduct was described as Exemplary. On his discharge from the army George Main was awarded a 20% war pension for malnutrition and privation with associated postural defects and tropical ulcers. Comparing the photos below of Pte George Main you can see the weight loss caused by being a FEPOW.

As a civilian in post war years George Main became a plastic moulder.

George Main died on the 9 April 1968 at 0530 hours in Eastern General Hospital, Leith. He was aged 52 years. His cause of death was Angiosarcoma of the small intestine and Carcinomatosis which could be argued were caused by his years of abuse at the hands of Japanese troops as a Far Eastern Prisoner of War. He was survived by his wife Margaret Stewart Main and their children Sandy, Helen, George and Carol. They lived at 8 Croft Road, Murray 2, East Kilbride. His father was George Green Main a retired General Dealer and Robina Main (nee Black) who lived at 9 Froghall Place, St Machar in Aberdeen.

Territorial Army Record of Service Paper of a man deemed to have been enlisted into the Territorial Army for the duration of the Emergency under the provisions of the National Service (Armed Forces) Act 1939.

This man was a POW in Jap hands for over three years. He has given every satisfaction during his service and he is thoroughly honest and sober, reliable and trustworthy. He should do well on taking up civilian life again. 16 Feb 1946 (written by a Captain of the Gordon Highrs)

Private George Main of the Gordon Highlanders was awarded the following WW2 medals:


If you would like to contribute any info or photographs related to Gordon Highlanders WW2 please contact me.