The example of the Declaration below is for Staff Nurse Cooke who enlisted in the Queen Alexandra's Imperial Military Nursing Service Reserve during the First World War. 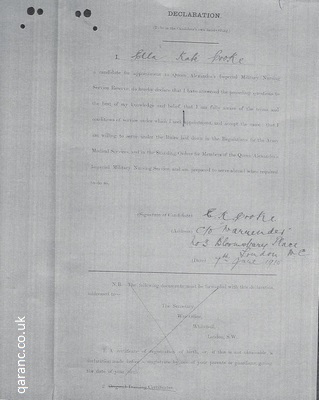 
To be in the candidate's own handwriting

a candidate for appointment to Queen Alexandra's Imperial Military Nursing Service Reserve do hereby declare that I have answered the preceding questions to the best of my knowledge and belief, that I am fully aware of the terms and conditions of service under which I seek appointment, and accept the same; that I am willing to serve under the Rules laid down in the Regulations for the Army Medical Services, and in the Standing Orders for the Members of the Queen Alexandra's Imperial Military Nursing Service, and am prepared to serve abroad when required to do so.

N.B. The following documents must be forwarded with this declaration, addressed to -

1. A certificate of registration of birth, or, if this is not obtainable, a declaration made before a magistrate by one of your parents or guardians, giving the date of your birth.