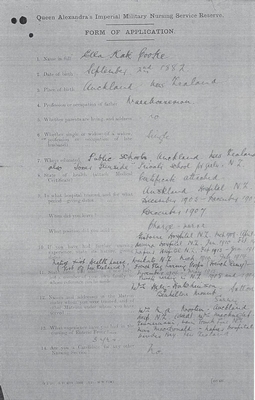 Questions asked include name, date and place of birth.

Profession or occupation of father, whether parents are living and address.
Whether single or widow, profession of late husband if a widow.

In what hospital trained and for what period give dates, when did you leave, what position did you hold.

If you had further nursing experience and state its nature, giving dates.

State name and address of one lady, not a member of your own family, to whom reference can be made.

What experience have you had in the nursing of Enteric Fever.

Are you a candidate for any other nursing service.