Copy of a nurse's reference written by her Matron: 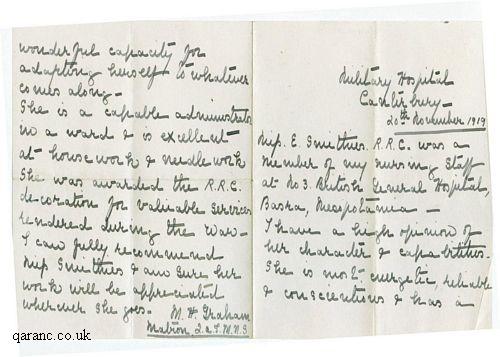 The photo above is a copy of as reference given to QAIMNS(R) nursing sister Miss Ethel Smithies upon her return to civilian life. Read more about her and see her photograph on the Royal Red Cross page.

Military Hospital Canterbury
20th November 1919
Miss E Smithies R.R.C was a member of my nursing staff at No. 3 British General Hospital, Basra, Mesopotamia.
I have a high opinion of her character and capabilities. She is most energetic, reliable and conscientious and has a wonderful capacity for adapting herself to whatever comes along.
She is a capable administrator in a ward and is excellent at housework and needlework.
She was awarded the RRC decoration for valuable services rendered during the war.
I can fully recommend Miss Smithies and am sure her work will be appreciated where ever she goes.
M H Graham
Matron QAIMNS


An outstanding reference for a nurse who herself went on to become a Matron of a London Children's Hospital.

Interestingly it mentions her ability at housework and needlework, two important duties that nurses would undertake on behalf of their patients. Modern day nurses may baulk at having to perform such duties that are now contracted out. Standards of cleanliness were high in military and indeed civilian hospitals and inspections by the Matron regularly took place and woe betide anyone with an untidy ward!