Our first stop was Lahore and here we halted for a break of one hour. There was a small NAAFI canteen on the station and like magic they produced a good meal of fish and chips and coffee. It tasted good and I felt better for it. Arriving at Karachi late at night. I was met by the matron of the military hospital and stayed in the mess as a guest for four days. I took this opportunity to look around. It is a mixed place of some very poor hovels, the usual zuk and shops and, in one part, quite a wealthy residential area with well-built modern houses and clean, well-kept gardens and roads. Expensive cars were driven around looking rather out of place with the Indian transport which was the gharry pulled along by thin and badly fed horses almost too weak and exhausted to walk, let alone run. 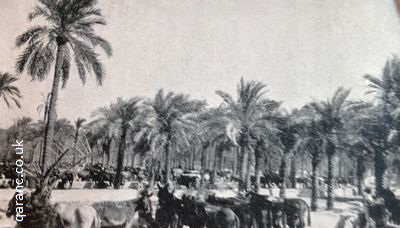 I was now to proceed on the next stage of my journey and found that the delay was due to the embarking of British and Indian troops with the active service equipment. The docks were about a mile from the hospital, and on arriving there I met several other QA Sisters making this journey and it was nice having their company. The old ship taking us from Karachi to Basrah was the City of London, a real war veteran looking somewhat gloomy in her dark-grey paint, thus making it difficult to be seen at night. The officers' bunks were very clean and comfortable, also the dining saloon, and it had a small bar with plenty of drinks. The captain was a real pukha sahib! The journey took ten days, but the food was very good and plentiful, and the bar helped us forget the trip down the Gulf. The old ship was loaded to capacity with troops and also hundreds of Indian prisoners, criminals collected from all over India, being sent to work making the new road from Basrah to the Russian frontier. Some had chains on their ankles and they looked a pitiful yet desperate crowd. These men I was to meet again, though I did not know this at the time.

We stayed in the port of Karachi for the first night waiting for word to come through to say it was safe to proceed. Leaving the open sea and coast of Sindi and Baluchistan and, taking a sharp headland turn, we entered the Persian Gulf. The Gulf could tell many stories of years gone by when it was used for slaves, gun-running and piracy. We passed Kuwait, noted for pearl fisheries, and the small islands to the south, Bahrein and Mubarak, now occupied by the IPC and oil refineries. The Sheik of Kuwait lent one of his places for the QA Sisters and officers spending their leave.

Arriving at the Gulf Bar we had a rather unpleasant sensation. The big vessel could be heard scraping the flat mud bottom of the Bar, creeping along inch by inch with engines panting and puffing. What a relief when passed over. The heat here was terrific. Abadan was passed, this being another of the IPC oil refineries with its huge grey tanks and smoking chimneys. Forty miles from Abadan is the Shott-El-Arab only twenty miles from Basrah. The Shott-El-Arab is about a mile wide, with date plantations on either side. 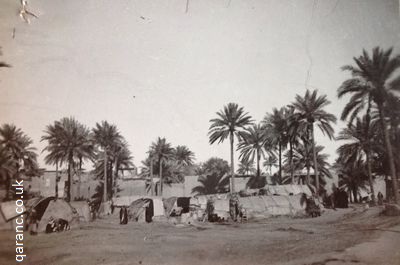 Arriving in Basrah Port on December 23, the skipper gave us a wonderful Christmas dinner of turkey and plum pudding before we disembarked. The rains had commenced in this area and everywhere was flooded. An inspection was made before we landed to check up on our rations of hard biscuits, cheese, bully beef and tea in tablet form. Chagils (canvas water bags) were filled with fresh water, these bags keeping the water very cold and fresh. Transport could not get to us from the Shaiba Desert, the only roads being tracks made by lorries. A Red Cross train was standing empty in Basrah station so we made it our temporary billet, this lasting two days. Having used up our rations, and having no water to wash with, we began to feel really browned-off. Our last real meal was the one we had before disembarking. Three of us went exploring and after walking with difficulty for some distance we spotted a seaplane about to land and in following its course we discovered the Magil Air Port Hotel. Going in, we ordered a nice meal which cost us seven shillings and sixpence each and a hot bath costing another half a crown, but it was worth it. Feeling very pleased with ourselves, we went back and told the others, they, of course, immediately following our example. 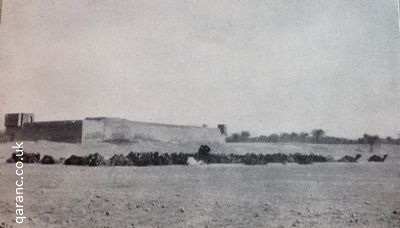 In the meantime the authorities got busy and managed to take us by train to a desert siding about sixteen miles away and, there being no platforms, we had to be lifted down from the train. Lorries and ambulances met us to take to the hospital six miles away. It was rough going and made my bones aches for days. It was pitch dark when we arrived, and as our hurricane lamps had no oil in them we had to use a torch to find our tents and sort our kit for bedding. By this time it was midnight on Christmas Day, so several of us went into one tent for the remainder of the night, making ourselves tea on a charcoal fire and waiting for daylight to find out how the land lay. Boxing Day was spent putting up tents and getting a five hundred-bedded British hospital ready. This area was used in World War I. Water had to be carried over the desert in water carts until the Royal Engineers laid down pipes and connected us up with the IPC works not far away.

On this desert stood the ruins of old Turkish forts where the Battle of Bund was fought. The hospital unit used the fortresses for the keeping of stores and slaughtering of sheep for supplying rations. Mutton was the only fresh meat available, the remaining rations being all tinned.

The heat was terrific, mosquitoes and sandflies, also the heat, taking a heavy toll on lives, there being many deaths among the British and Indians through heat-stroke. Eventually ice pack centres were built underground at various places. The ice was supplied by IPC, being made in a special plant in one of their refineries and delivered twice daily in huge blocks. Dysentery and malaria also did a great deal of damage. Quite near was the British cemetery (or what remained of it) of World War I, now just mounds of sand. As time went on they gradually dug deep trenches and made wards with canvas tenting for shelter, and these were cooler for the patients.

My stay with the unit only lasted two weeks, just long enough to get it working, reinforcements of nursing sisters, orderlies and troops beginning to arrive in the area from the United Kingdom. I received orders to proceed to an Indian and British tented hospital of one thousand beds six miles further on. This was the last time for me to meet my old unit. In the meantime I had been promoted to Major, and how true is the old army saying, "Heavy are the shoulders that wear the crown!" My duties at the Indian and British Hospital were to open and equip a large operating theatre, also to train nursing sisters, both British and Indian, in operating theatre technique of field operating under emergencies. This hospital was known as the 28th B & I Combined Hospital. The surgeons were British and Indian, the work varied and interesting, and the place kept very busy. Before a sister could take charge of a field operating theatre or hospital in the Army she had to have a six weeks course and if found efficient and suitable her recommendation would be sent to headquarters. They would then issue her with a special certificate and transfer her to a Casualty Clearing Station or active service, or to hospital ships or to any of the larger military hospitals. 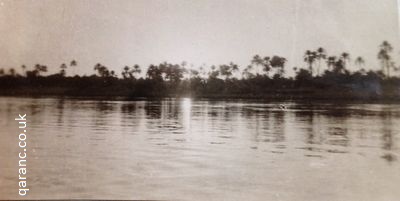 The nearest town or village for shopping purposes was fourteen miles away, a place called Ashar, being really native and a bad spot, their feelings towards us being far from friendly. Just before our arrival there had been some fearful fighting and bloodshed. This was finally cleared up by the brave little Gurkha. This regiment was alongside our hospital and they used to do the guard duties. They were the only soldiers the Arabs of Ashar feared, and when Arab shoppers saw them coming they would run behind closed doors. We used them as escorts. 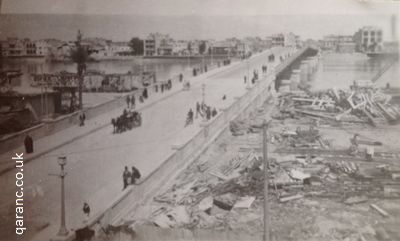 Ashar is noted for its zuks, its silver trinkets of beautifully done filigree work, date palms and factories, also bananas. The route to the town was along a track made by ambulances and lorries. Transport in the form of a converted Studebaker was provided for the staff by the Indian Government. In the early morning the desert would be white with salt and looked as if it had been snowing. Arabs would collect it in pans, then load it into baskets carried by donkeys, and take it to a factory where it would be made fit to use. It was very strong salt and could only be used for cooking. 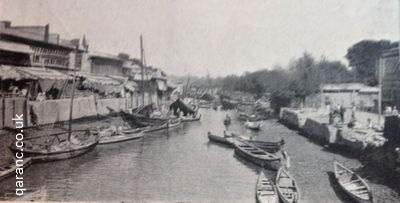 Along the main highway in the town ran a canal called Ashar Creek and this was always busy with small craft called belums. These are polled along by Arabs and carry fruit to the markets and to the ports to be shipped to various parts of the world. The belums are a kind of canoe, being modelled on fantastic lines and rather picturesque. They say the same pattern was used in the days of Abraham. Lovely Persian carpets could be bought in the zuks, but if you preferred they would weave you your own design. Silks from Persia and Damascus could be bought quite cheaply.