Volume 18 of the Waterways Journal, by the Boat Museum Society at Ellesmere Port, Cheshire has a most interesting article on the Water Ambulance Flotillas in France in World War One. This fully referenced article by historian David Long describes the work of the Royal Engineers in France where they maintained and enhanced the French canals. 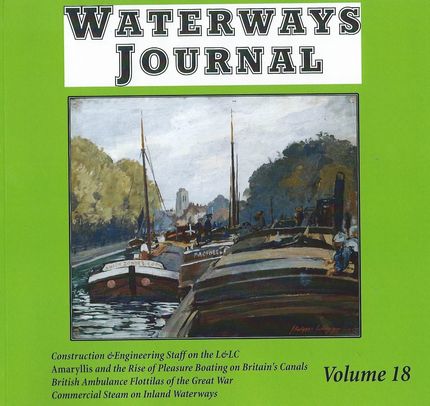 This important work enabled the Hospital Barges that transferred patients through the chain of evacuation and was a much preferred route due to its gentle nature that prevented sudden movements that in many cases opened wounds. During the journey members of the Royal Army Medical Corps and the Queen Alexandra's Imperial Military Nursing Service, like Matron Kate Read, could tend to the wounded, clean and feed them.

David's article examines the role of the Red Cross and the St John Ambulance Service during the evacuation of wounded soldiers by hospital barge where civilian vessels were volunteered by their owners. As one example he cites the case of Member of Parliament for the Isle of Wight, Mr Douglas Bernard Hall, who conveyed patients aboard his yacht the Sardonyx. Extracts of his accounts through letters and newspaper reports are featured that includes transferring the wounded from the Battle of Mons and transporting ambulance stores to Le Havre and Rouen as well as to the military hospitals at Versailles and Paris. 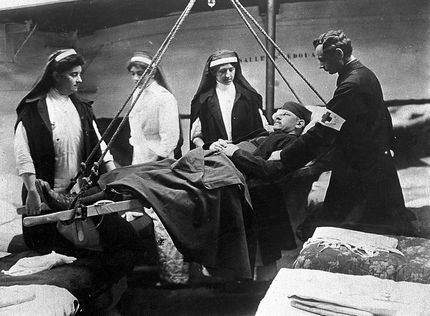 A French barge of World War One showing the lowering of a soldier into a hospital barge using a derrick crane. Photo copyright of the Wellcome Library, London.


Douglas Hall may have begun his involvement as a volunteer under the auspices of the Red Cross but his experiences soon led him to become a champion in and out of Parliament for the establishment of the hospital barges, and the author describes the problems he had with officialdom in London. This led him to set up the British Water Ambulance Fund which funded No. 1 Flotilla, which he ran as an officer in the RE for most of its brief life on the Seine in 1915 - and which prompted the establishment of the other four Flotillas on the northern French waterways by the RE and RAMC. It was for this work that he was made a Baronet after the war.

The main thrust of this article is that the Hospital Barges came into being, not as part of a carefully crafted military plan, ie the ‘chain of evacuation’ but through Douglas Hall’s tenacity and personal commitment in the face of official indifference/opposition.

Readers will be interested to learn about the sizes of the barges, how they were secured together to form a flotilla that was pulled by tug and how QAIMNS Nurses and RAMC Orderlies managed to get from one section to the other safely.

David has amassed some wonderful photographs, images and postcards to accompany his interesting article that includes a memorial to war poet Wilfred Owen at the side of Sailly Lock on the Somme, postcards by Sergeant David McCutcheon Brown RE who was a shipyard draughtsman and engineer who served on Hospital Barges during the Great War and of the QAIMNS Nursing Sisters tending to patients. 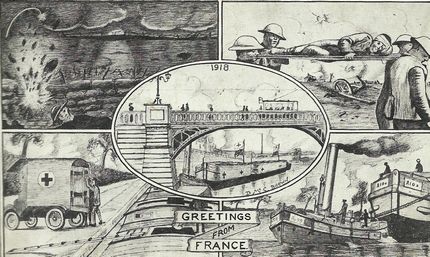 Cartoon postcard from World War One depicting the chain of evacuation of hospital barges through France.


His article continues with how funds were raised for the barges and equipment and day to day life. For example readers will find interesting how patients were transferred safely from the quayside into the deep holds of the barges, their type of injuries and nursing care and the facilities aboard the vessels.

The journal can be ordered from www.boatmuseumsociety.org.uk