Angela Bayliss kindly provided this newspaper clip of Captain Margaret Hair QARANC at the investiture of her brother WO2 Hair in Bonn, Germany, receiving his British Empire Medal. Captain Hair was the midwife who delivered Angela's baby at British Military Hospital Hannover. 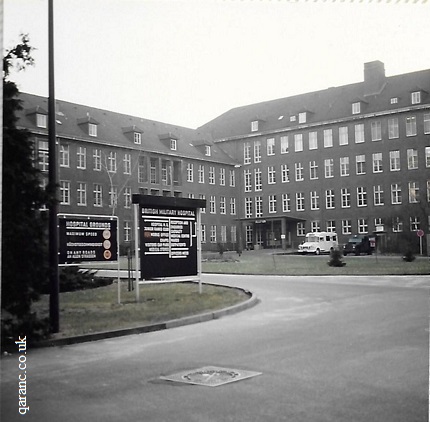 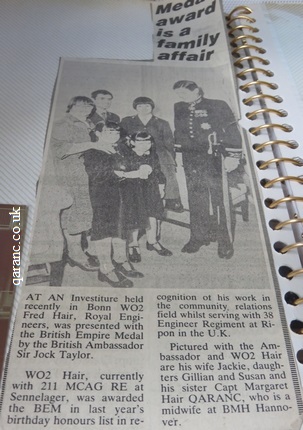 The Forces newspaper cutting has a reference to 4th March 1982 on its back. It reads:

Medal award is a family affair.

At an investiture held recently in Bonn WO2 Fred Hair, Royal Engineers, was presented with the British Empire Medal by the British Ambassador Sir Jock Taylor.

WO2 Hair, currently with 211 MCAG RE at Sennelager, was awarded the BEM in last year's birthday honours list in recognition of his work in the community relations field whilst serving at Ripon in the UK.

Pictured with the Ambassador and WO2 Hair are his wife Jackie, daughters Gillian and Susan and his sister Capt Margaret Hair QARANC, who is a midwife at BMH Hannover. 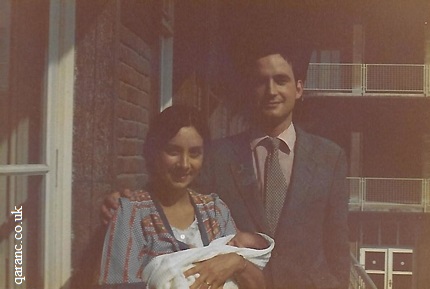 Here is the proud mother and father holding their daughter, Isabel, in September 1981 at the BMH Hanover on the balcony outside her room in the post-natal ward.