This photograph is of the grave of Doctor Elsie Maud Inglis who was the founder of the Scottish Women's Hospitals for Foreign Service with the Allies in France, Serbia and Russia. 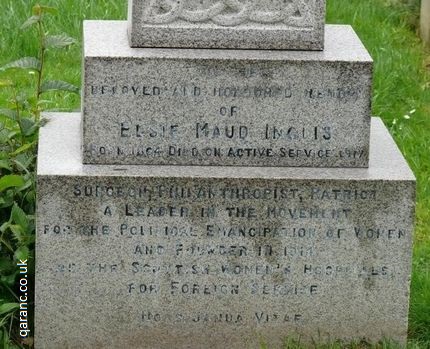 To the beloved and honoured memory of Elsie Maud Inglis.
Born 1864, died on active service 1917.
Surgeon, philanthropist, patriot, a leader of the movement for the political emancipation of women and founder of the Scottish Women's Hospitals for foreign service.


She returned to Britain to on the 25 November 1917 and passed away on the 26 November at the Station Hotel in Newcastle upon Tyne.

Her funeral was held on the 29 November at St Giles Cathedral in Edinburgh, Scotland. She is buried in the north section of nearby Dean Cemetery.

A memorial service was held on 30 November in London, at St Margaret's Church, Westminster.

There is a memorial plaque on the North aisle of St Giles Cathedral and at Mladenovac in Serbia, where there is also a memorial fountain.

Elsie was born in 1864 and is famed as a pioneer of medicine. She studied medicine at the Edinburgh School of Medicine for Women and was to become a notable supporter and activist of the Suffrage movement.

During World War One she had offered her services at the Western Front to the Royal Army Medical Corps, but the War Office refused her idea of a medical unit staffed by women. She then proposed the same idea to the French Government and after acceptance, set up the 200 bedded Abbaye de Royaumont Hospital, within three months of the outbreak of war. It was exclusively staffed by women. Her role developed and soon other women doctors were serving for the Allies in active areas such as Corsica, Malta, Romania, Serbia (where she also served) and Salonika. Dr Inglis was captured whilst in Serbia and was repatriated and she soon started seeking funds for a Scottish Women's Hospital (SWH) team in Russia. This she successfully did and in 1916 she was in charge of the hospital unit in Odessa, Russia. Sadly she developed cancer a year later and returned to England.

More Memorials to Nurses and Doctors.