Dumfriesshire in the Great War

, part of the Your Towns and Cities in the Great War series, by Timothy McCracken, provides a fascinating insight into the impact of the First World War upon the civilian population and how they too played their part. 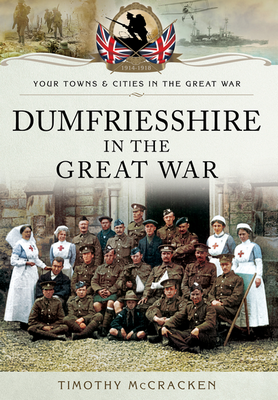 This is not just within Scotland, but the impact world-wide. For example, we learn about the Belgian Refugees who were settled to safety in this Scottish borders area.

Dumfriesshire played a huge part in the war effort. This ranged from war manufacturing, eg machine gun parts, through to the gathering of sphagnum moss, the natural materials for wound dressings. This moss would then be sewn in muslin bags in specially set up sewing rooms in villages.

The King's Own Scottish Borderers are the local regiment and feature heavily in the book. This includes a most interesting section about how war memorials in villages and towns were fund-raised and commissioned. In one town, 6000 attended the unveiling ceremony.

For us nurses the most interesting sections will be the detailed accounts of the many Red Cross and Order of St John of Jerusalem Auxiliary Hospitals that opened to nurse and rehabilitate wounded soldiers. Timothy has collated many historically important photographs of these buildings, their staff and patients. Alongside these are the names of the Matrons and nursing staff, the type of patients, entertainments they enjoyed and even accounting and descriptions of how such Auxiliary Hospitals received their funding and were able to open up to one year after WWI.

Dumfriesshire in the Great War is a great example of the magnificent work being carried out in rural areas of the Home Front and this volume will be of great interest to those with an interest in military nursing.