Biography of Sister Edna Lucy Craven who saw service throughout the Second World War in Britain, India and the Far East. 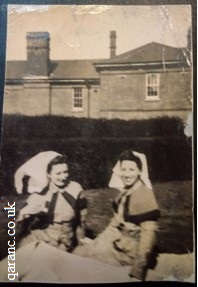 Pictured on the right is Lucy Edna Craven relaxing on the lawn with a picnic at the Cambridge Military Hospital in 1941.

She saw service almost entirely in India and the Far East. She was later to work as a civilian theatre sister at BMH Singapore in 1953 when her husband was there. There is a photo of her with a blood donor at BMH Alexandra Hospital Singapore. Her husband served in the Royal Signals, though little is known about his career because the files have possibly been restricted by the MOD.

Little is known about Lucy prior to the age of 17 years. She was born in July 1920 in Wolverhampton to James Craven, an Engineer.

She trained as a student nurse at the hospital at Kendal, Westmoreland. After qualifying as a nurse, she reversed her names to Edna Lucy. She made friends with a local girl also training at the hospital. This girl's parents pretty much adopted her, to the extent that the husband, a prominent local businessman, loaned her and her future husband the money for their first house. She referred to them, to third parties, as her parents and professed, when asked, to coming from Kendal. Her son, Christopher Nation, always knew them as Auntie Annie and Uncle Harry.

She then served in the QA's where she met her future husband on a troopship returning to Britain. He had been transferred to the Indian Corps of Signals for Independence and Partition. Lucy is thought to have already been on board for weeks, from Sumatra or Singapore or Ceylon. She claimed to be friends with the Bandaranaike family, including the woman who became PM.

The change of surname on marriage in 1948 and Army life made her pretty much untraceable to her family, should they have wanted to, in the confusion that must have existed after the war.

To add to her mystery, five years later, she was in Singapore with her husband and four-year-old Christopher who recalls the usual Army merry go round kept the trail well covered. I have an identity card first registered one week after my birth. By the time I was 10 months old, two further change of address boxes had been filled in. My mother was of an implacable nature in some aspects of life. Her determination to 'delete' her history prior to appearing in Kendal was set in stone and never wavered.

She returned to nursing when we got to Singapore in 1953, at BMH Queen Alexandra. She continued in Germany when my father was posted to BAOR, working in an Army hospital.

When my father was posted to the War Office, as was, we lived in Sevenoaks. She worked as a dental nurse for a local private practitioner. She loved that and started badgering me to become a dentist.

When they bought their first house - in Kendal - my father moved to the mess at Woolwich and my mother became the matron at Kendal High School for girls.

On returning to Catterick (where I was born) for the final posting of his Army career, my mother was sister i/c the Family and 8th Signal Regiment clinic. They bought a house in Richmond, Yorks.

She continued for some years after my father 'came out' aged 50 (though he took the same job as a Civil Servant until retirement at 65. All they had to do was change the plate on his office door. All he had to do was hang up his uniform and put on a suit).

At some point during this time she had a heart attack, though she denied it. Around this time she retired. I was making my way in London, so not on hand to see for myself.

So, QA nurse Lucy Edna Craven, later Edna Lucy and Sister and then Sister, Mrs Nation QA, had an interesting life, as most QAs of the period must have done. But the first 17 years are shrouded in mystery.

Her QA cape is on display at the Museum of Military Medicine.