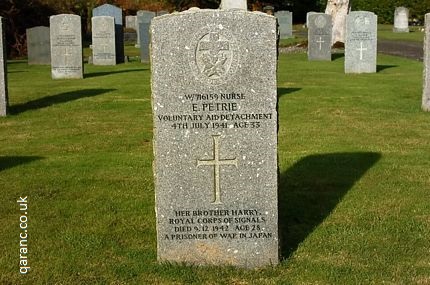 Elizabeth Petrie is buried in Plot 2 Row A Grave 5 of the Buchanan Churchyard Extension in Stirlingshire which was set up for burials from the military hospital which was set up in nearby Buchanan Castle. Elizabeth served in Detachment 16, City of Glasgow Branch, British Red Cross Society.

She was the daughter of Andrew Castel Petrie and Mary Elizabeth Petrie, of Riddrie, Glasgow.