This interesting article describes the care and treatment of Gurkhas and the Nepalese population surrounding British Military Hospital in Dharan with injuries ranging from shrapnel, snakebites that led to amputations, Tuberculosis and happier events of births.

The following are from the February 1977 edition of Soldier Magazine and are reproduced here with kind permission of www.soldiermagazine.co.uk 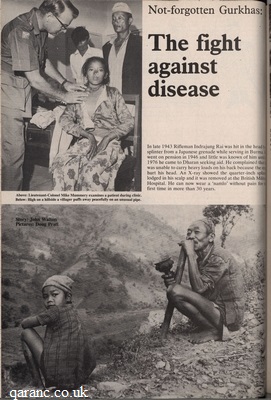 The original story was by John Walton whilst the pictures were by Doug Pratt. It reads:

The fight against disease

In late 1943 Rifleman Indrajung Rai was hit in the head by a splinter from a Japanese grenade when serving in Burma. He went on pension in 1946 and little was known of him until in 1976 he came to Dharan seeking aid. He complained that he was unable to carry heavy loads on his back because the straps hurt his head. An X-ray showed the quarter-inch splinter lodged in his scalp and it was removed at the British Military Hospital. He can now wear a 'namlo' without pain for the fist time in more than 30 years. 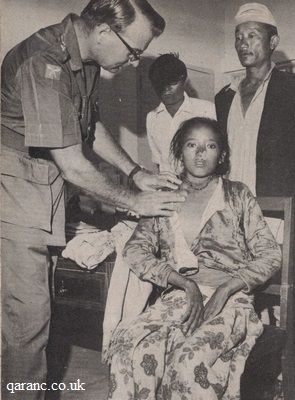 The photograph above shows Lieutenant-Colonel Mike Mummery examining a patient during clinic. Whilst the one below says; High on a hillside a villager puffs away peacefully on an unusual pipe. 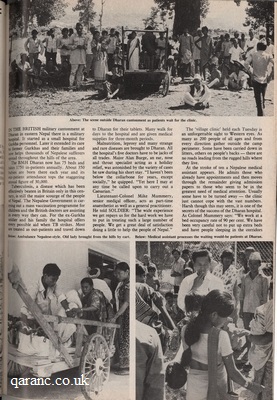 In the British military cantonment at Dharan in eastern Nepal there is a military hospital. It started as a small hospital for Gurkha personnel. Later it extended its care to former Gurkhas and their families and now helps thousands of Nepalese sufferers spread throughout the hills of the area.

The BMH Dharan now has 75 beds and takes 1750 in-patients annually. About 350 babies are born there each year and its out-patient attendance tops the staggering annual figure of 30,000.

Tuberculosis, a disease which has been effectively beaten in Britain only in this century, is still the major scourge of the people of Nepal. The Nepalese Government is carrying out a mass vaccination programme for children and the British doctors are assisting in every way they can. For the ex-Gurkha soldier and his family, the hospital offers every possible aid when TB strikes. Most are treated as out-patients and travel down to Dharan for their tablets. Many walk for days to the hospital and are given medical supplies for three-month periods.

Malnutrition, leprosy and many strange and rare diseases are brought to Dharan. All the hospital's five doctors have to be jacks of all trades. Major Alan Burge, an ear, nose and throat specialist acting as a holiday relief, was astonished by the variety of cases he saw during his short stay. "I haven't been below the collarbone for years, except socially," he quipped. "Yet here I may at any time be called upon to carry out a Caesarean."

Lieutenant-Colonel Mike Mummery, senior medical officer, acts as part-time anaesthetist, as well as a general practitioner. He told SOLDIER: "The wide experience we get repays us for the hard work we have to put in treating such a large number of people. We get a great deal of satisfaction doing a little to help the people of Nepal."

The 'village clinic' held each Tuesday is an unforgettable sight to Western eyes. As many as 200 people of all ages and from every direction gather outside the camp perimeter. Some have been carried down in litters, others on people's backs - there are no roads leading from the rugged hills where they live.

At the stroke of ten a Nepalese medical assistant appears. He admits those who already have appointments and then moves through the remainder giving admission papers to those who seem to be in the greatest need of medical attention. Usually some have to be turned away - the clinic just cannot cope with the vast numbers. Harsh though this may seem, it is one of the secrets of the success of the Dharan hospital. As Colonel Mummery says: "We work at a bed occupancy rate of 90 per cent. We have been very careful not to put up extra beds and have people sleeping in the corridors, because this will lower standards. What we can do for the people of this country is to have a hospital run to United Kingdom standards." 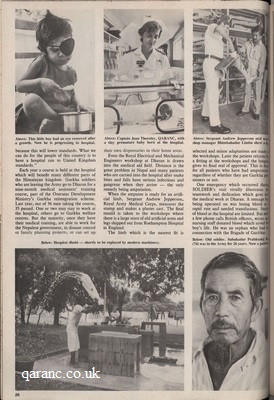 Each year a course is held at the hospital which will benefit many different parts of the Himalayan kingdom. Gurkha soldiers who are leaving the Army go to Dharan for a nine-month medical assistants' training course, part of the Overseas Development Ministry's Gurkha reintegration scheme. Last year, out of 36 men taking the course, 35 passed. One or two may stay to work at the hospital, others go to Gurkha welfare centres. But the majority, once they have their medical training, are able to work for the Nepalese government, in disease control or family planning projects, or can set up their own dispensaries in their home areas. 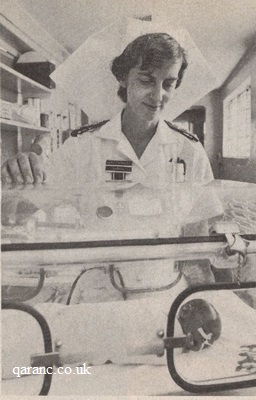 Captain Joan Thornley QARANC with a premature baby in an incubator.

Even the Royal Electrical and Mechanical Engineers workshop at Dharan is drawn into the medical aid field. Distance is the great problem in Nepal and many patients who are carried into the hospital after snake bites and falls have serious infections and gangrene when they arrive - the only remedy being amputation.

When the amputee is ready for an artificial limb, Sergeant Andrew Jepperson, Royal Army Medical Corps, measures the stump and makes a plaster cast. The final mould is taken to the workshops where there is a large store of artificial arms and legs shipped out from Roehampton Hospital in England.

The limb which is the nearest fit is selected and minor adaptations are made in the workshops. Later the patient returns for a fitting at the workshops and the hospital gives its final seal of approval. This is done for all patients who have had amputations regardless of whether they are Gurkha pensioners or not.

One emergency which occurred during SOLDIER's visit vividly illustrates the teamwork and dedication which goes into the medical work at Dharan. A teenage boy being operated on was losing blood at a rapid rate and needed transfusions. Stocks of blood at the hospital are limited. But after a few phone calls British officers, wives and nursing staff donated blood which saved the boy's life. He was an orphan who had a connection with the Brigade of Gurkhas. 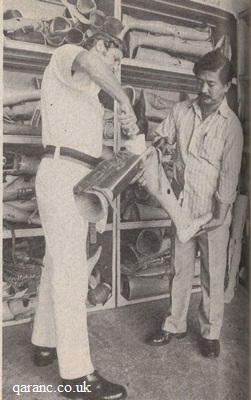 Read more about the history and see more photos of BMH Nepal.