Below are photographs of the memorial stone for nurse Vera Judkins kindly supplied by a relative wanting to learn more about her great aunt. 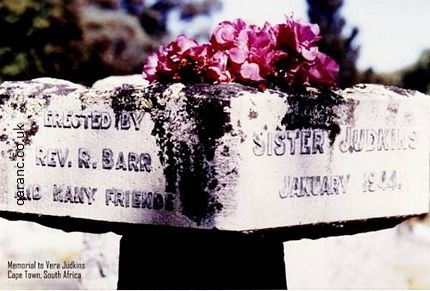 Vera D Judkins was born on the 7th March 1913. She did not marry and we know that aged 26 years, she left England on 21st September 1939 on the Warwick Castle ship bound for Cape Town South Africa. She was traveling alone. Her address was 324 Finchley Road, Hampstead, NW3.

There is no record at the Commonwealth War Graves Commission so we do not know if she was working there in the Queen Alexandra's Imperial Military Nursing Service or in another capacity.

Her family think that Sister Vera Judkins died of a heart related problem on the 4th January 1944 while en-route to or from England. She was buried in Cape Town. The reverse side of her gravestone says:

Love guided her fingers, Love filled her heart, Love took her home. Erected by Rev R Barr and many friends. 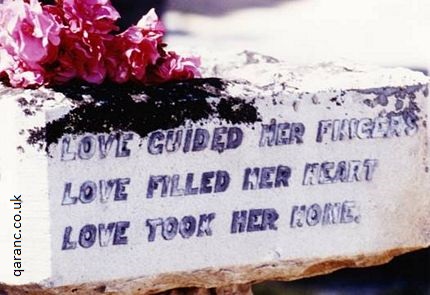 The Reverent R Barr was the minister at the Mowbray Presbyterian Church in 1944.

Below is a copy of her Death Certificate and Death Notice. She died aged 30 years of Subacute bacterial endocarditis at the Rondebosch and Mowbray Hospital, Rosebank, Wynberg District. She was buried in Plumstead Cemetery. 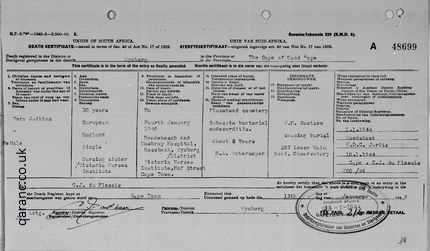 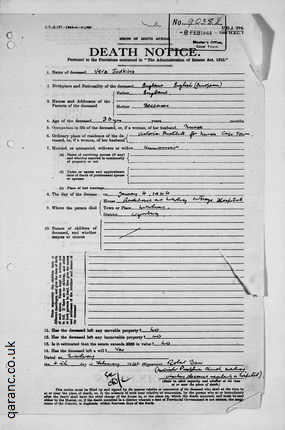