Below are diary extracts from Polish Red Cross trainee nurse Danuta Maczka Gradosielska who was admitted with typhoid fever to the 34th British Commonwealth General Hospital at Teheran during the Second World War. 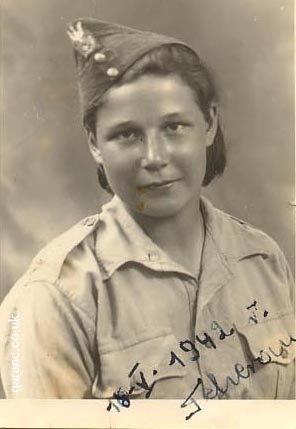 
We think she was one of many who were cared for by QAIMNS Matron Hughes at the 34 CGH (Indian Army Hospital), in tents, outside Teheran from 18 May until 1 August 1942.

Her World War Two diary from this period reads:

While I and some friends were taking a nursing course held by the Polish Red Cross, I became ill with typhoid fever. From 18 May - 1 August I was in the 34 CGH (Indian Army Hospital), in tents, outside Teheran, where the doctors and nurses were mostly Indian. I was lucky that there was both medicine and care available.

I don't remember much from that time as I was unconscious or delirious for weeks. They really didn't expect me to survive, being just skin and bones after Siberia. I don't know what kind of medicine they gave me, but I remember being given syrup from canned peaches at the beginning and later having to drink a glass of Guinness (a thick, dark beer) every day - which I thought tasted horrible, but the nurses made sure I drank it up. I was in very bad shape, my hair fell out, I was blind for a while, and I had to learn to walk again.

I remember feeling someone making the sign of the cross on my forehead while I had the fever and maybe this helped me to survive. It was a male nurse called Patrick who expected me to die every day after he finished his shift. He called me Baby because I was so thin.

When I left hospital, I spent two weeks convalescing in the civilian camp where Helena and an aunt were staying, I was happy to be with family. It was in a beautiful park where I could rest, draw and write poems.

By this time, my friends had finished their nursing course and were already working in the hospitals. I was too weak to work in the kitchen (I fainted while peeling potatoes!) so I was assigned to the Transport Office, as I had very neat handwriting! 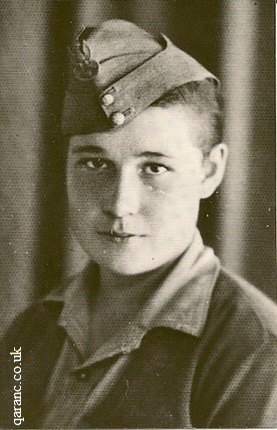 The photo above shows Danuta in her 318 Transport Company PWSK uniform after her nursing care by the QAs.

Her daughter, Elzunia, express her heartfelt thanks to the nurses and all staff at the hospital - they saved mum's life - without them I wouldn't be here, nor would my 5 brothers and sisters!!

Read more diary extracts from Danuta on the family website at www.kresyfamily.com where she sees service in Iraq, Palestine, Egypt and Italy.