Sister Poppy at the Front


This delightful book, aimed at primary school age children, gently informs and entertains the reader about the nurses of the First World War and how life would have been like for them in France. Sister Poppy at the Front is beautifully illustrated by the artist Mik Richardson and carefully worded by Brenda Gostling. 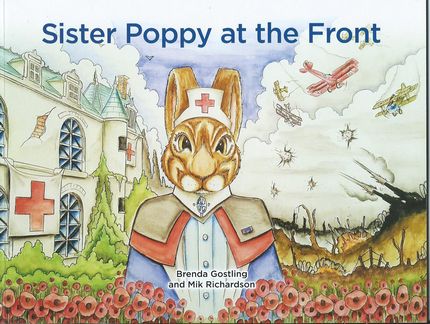 Brenda and Mik have amalgamated the uniforms of the Queen Alexandra's Imperial Military Nursing Service and the Voluntary Aid Detachment to form the uniform as worn by Sister Poppy who nurses on a ward at No. 33 Casualty Clearing Station. 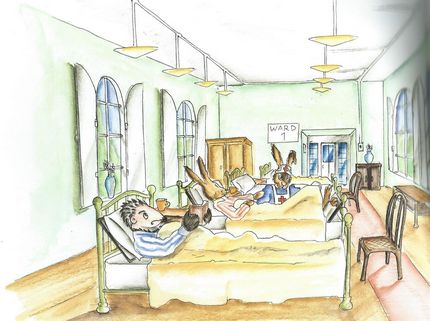 One gets a childlike feel for the frontline, as well as a true account for how it would have felt to be a nursing sister near to the action. This is told in pages like:

The guns have been booming for several days now. "Our guns talking to theirs", she tells herself. "No difference really: they speak the same language."

She has clearly researched her topic and this shines through her narration to the children. She has drawn from the war diaries of QAs like Kate Luard to gently inform readers of the reality of war, trench life, type of wounds and injuries and casualty evacuation.

The hare in the story was chosen after the GoGoHare project in Norwich for the summer of 2018. This sculpture Trail by Wild in Art, sees a First World War nurse's amalgamated uniform painted on a hare, inspired by Edith Cavell, sponsored by the Independent Financial Advisors Almary Green. This project raises funds for the children, young people and families charity, Break. Parts of the profits of Sister Poppy at the Front will be donated to Break. Fifty hare sculptures can be seen darted around Norwich and a further eighteen are scattered throughout Norfolk. It is the fiftieth anniversary of Break who support vulnerable children, young people and families.

I would recommend Sister Poppy at the Front for every child to read so that the reality of war can be gently told, so that nurses and soldiers sacrifices are never forgotten. This is a book that parents and grandparents should be reading with their cherished child on their knee so that the heroes and heroines of the Great War are remembered by a new generation.

Copies are available from www.brendagostling.co.uk/books/ or from local shops such as at Jarrolds.