You know you are in for a good read when you see a stunning book cover and a warm title. Sister Sunshine: A Wartime Romance

is the most moving and personal book I have read about the QAs. It collects the diary and letters of Nursing Sister Joy Barber who joined the QAIMNS in 1942 and her future husband Tony Case who saw action in North Africa and Italy with the Sherwood Foresters. Joy too served in these locations with the 103 Hospital and fortuitously their paths crossed and romance blossomed despite the front line activities.

Joy was given the nickname Sister Sunshine because she was always smiling and cheerful and this is reflected in her journal and correspondence. We learn about her first posting to Leeds Castle near Maidstone where she nursed at this officers' hospital and soon follow in her footsteps through various postings overseas.

There is plenty of humour throughout: we learn about her first taste of rum whilst anchored off Gibraltar due to U-boat activity and what she thought of some of the Matrons! Whilst Tony finds fun in his tale of going to a barber's in Algiers and coming out looking like a wartime spiv with a pencil moustache which he quickly removed himself.

The couple cleverly overcame the army censor in their letters by using code based on Bob Hope and Bing Crosby films to reveal their locations and movements to each other. Tony saw brutal fighting against the Germans during the Tunisian Campaign and was injured. His letters give us a deeper insight into the thoughts of patients in the 5th and 94th General Hospital and their treatments. The Sisters are all old and ugly and their uniforms don't fit. Oh what memories the sight of the grey and red bring back. Joy is soon able to visit him in the 94th General Base Hospital in Algiers and this prompts a marriage proposal and soon we are reading about the hurdles the couple had to overcome in their relationship and with military bureaucracy. This included Joy having to ask permission from her Matron, Miss Blore of the Territorial Army Nursing Service and gaining a licence from the Consul.

The personal theme continues with Joy's daughter, Jane E K Clark, adding explanations to explain gaps in letters or additional information to seamlessly continue this wartime romance. This includes an account of the first civilian child to be administered the recently invented and manufactured penicillin and how this new antibiotic was administered. Even Joy's brother, Freddie, who served with the 8th Army, is able to surprise Joy and Tony on separate occasions to truly make this a family book. 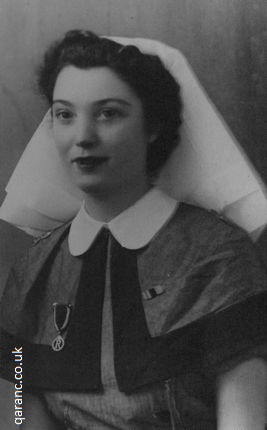 We learn about the difficulties QAs had in setting up the new tented 103 field hospital and the problems faced in their tented accommodation such as weather, malaria, dysentery, sandstorms, wildlife and rations. This includes an interesting section of brewing up tea with an old petrol can and then having to nurse 200 patients. Her kind nature is shown when she helps her General Duty Orderly (GDO) gain qualifications and a much needed pay rise for his family.

Before saying farewell to the desert, the tents and the everlasting SAND, flies, lizards - camping is out for me forever.

Tony is soon in the thick of it again and is wounded at the Salerno Landings but is soon discharged and posted to the Incident Response Training Department (IRTD) at Philippeville. The couple correspond by letter and are able to spend some time together at the Transit Hotel in Constantine, where they enjoyed dinner at the Casino whilst listening to their orchestra.

Back on nursing duties Joy now has a new TANS Matron, Miss Simpson:

Feeling rather miserable. Reported back to Miss Simpson, our new Matron, TAN and fortyish. She arrived last week. Of course, she didn't know me, and seemed very surprised that I had been on leave. Not only surprised, but outraged! I had a distinct feeling of unfriendliness here, obviously hadn't been told of my absence. Explained the situation, husband on leave so I got leave. She certainly didn't approve of such 'goings on'. Of course, in her day, nurses didn't marry. If they did, they left!! Not a good beginning.

The couple are soon to be separated when Joy is posted to Italy and sails on His Majesty's Hospital Ship Dorsetshire.

7am sailing into the breath-taking beauty of the Bay of Naples, calm sea now and the sun is shining brightly but then as we get closer, we notice that the harbour is littered with damaged ships, the buildings behind in ruins. Impossible for ship to dock properly, gets as close as possible. Ropes are fixed across and we had to clamber over upturned ships' bottoms (!) clinging to the ropes - very slippery, very scary! Helped up onto the dockside, man-handled really! However, we got there and found several ambulances waiting to transport us further. Drove away through crowds of people shouting and throwing flowers at us. What a welcome!

Joy is driven through the battle scarred streets to Castellamare Transit Camp which was used as a German military hospital during their occupation. New problems to overcome are rats, fleas, lice and the bitter cold. Soon though, as the dramatic front cover reveals, nature takes over and Mount Vesuvius erupts. Whilst Joy and her colleagues battle nature whilst treating casualties at a hospital in Nocera, in which they are ordered to save themselves and not their patients if there is an earthquake as they will be of more use to a greater number of survivors, Tony takes part in the Battle of Anzio. Amongst this mayhem Joy discovers that she is pregnant and is posted to the 104th Base Hospital where the Sisters' Mess is a much more comfortable converted villa. She is then sent home aboard the converted cargo ship EI NIL. Though Joy has now left the QAs to safely have her baby, Josephine, back in Britain, their story continues with their letters. This includes Joy's accounts of the V2 flying bombs hitting London and Kent and Tony joining the Special Boat Service and another spell as a patient in the 98th GH.

I would thoroughly recommend Sister Sunshine: A Wartime Romance to anyone with an interest in the Second World War and military nursing to gain a rare insight into the personal lives of those who fought and nursed.