Pictured is an early use of the Thomas Splint during World War One. Its application saw fractured femur mortality rates decrease by 82%. It reduced movement, pain and prevented haemorrhage upon its immediate application and facilitated easier transportation and evacuation. Its continued use in traction helped align the bones to encourage healing. 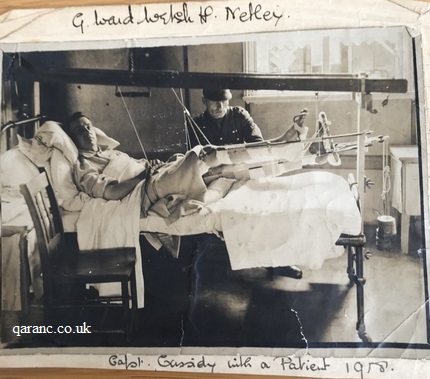 Canvas was typically used as the covering over the metal frame. Though in this black and white picture it looks like bandages may have been used.

The photograph of the patient in traction is from the collection of Mildred Taylor Smithson who was a record keeper at Welsh War Hospital Netley during the First World War.

Written on the photo is G Ward. Capt Cassidy with a patient 1918.