Uniforms Worn During World War Two by the Allies


Kitted Out: Style and Youth Culture in the Second World War is a comprehensive guide to the uniforms worn during World War Two by the Allies. It predominately studies those worn by females and youths, but also includes information about those uniforms worn by those in services like the Army, Royal Air Force, and those at home such as the National Fire Service and the Women's Voluntary Service for Civil Defence. There are many pages devoted to the uniforms of the Queen Alexandra's Imperial Military Nursing Service which includes some great first-hand accounts referenced through war diaries. 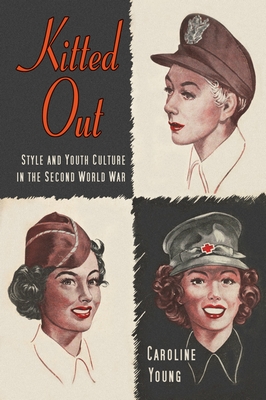 For example, we hear from QA Mary Morris who recalls buying her indoor uniform from Austin Reed:

It is very attractive, a simple grey dress, scarlet cape and white organdie headdress, two lovely shining pips on the shoulder and our own QA badge.

Preparing for D-Day, Mary and other QAs were issued with tin helmets and battledress with khaki barathea suit, shirt and tie and she recalls her other equipment:

There are fascinating pieces of equipment such as a canvas bowl on a tripod, a canvas bucket, a Tilley lamp and even a collapsible canvas bath. We had great fun trying out this latter piece of equipment.

Other pages regarding the QAs include being ordered by Matron to apply lip stick to increase the morale of troops, General Montgomery believing that the white veil enhanced the femininity of British nurses which was vital in keeping up the morale of wounded men and how wolf whistles ceased once rank slides were seen.

The fashions and trends of the time are discussed in detail, such as the black shirts of the followers of Oswald Mosley and their attempt to introduce jackboots, SS style coats and red, white and black lightning flash armbands, through to the seemingly innocent dance crazes of youngsters in Britain and even Germany and their resultant dress codes.

Dancing is strongly discussed and this ranges from dance halls through to formal coming out balls and cocktail parties of the debutantes with their couture gowns.

The case studies of individuals and their unique paths to war provides detailed insight into the stresses and strains of this era, such as the under nourished military recruits.

Another interesting chapter sees the concept and design of the new khaki wool serge fabric short blouson jacket and baggy trousers battledress with Glengarry cap and the heavy boots and puttees which characterises the Second World War. The latter being worn by many QAs well into the 1980s.

Nicknames of the era, such as the Brylcreem Boys, Brown Jobs and Sprogs are described as are the ludicrously times, such as being commanded to be in possession of a full kit before being evacuated from Dunkirk. Diarists recount having to search the beaches for replacement items. Red Cross nurses at home in Britain recount their shock at the injuries they encountered.

The QAs were not immune to such ludicrous uniform choices for war as Audrey Hayward wrote prior to sailing for North Africa. She was issued with white overalls with epaulettes and pearl buttons, white stockings and shoes, a white felt hat with ribbon and needed a very old-fashioned parasol. She recounts:

Just to complete the feeling that you had strayed into an earlier century the whole thing had to be topped off by a white parasol with a red lining! We scoured the shops of Lowestoft for a red-lined parasol. In the end we managed to find a green-lined one which I decided would have to do. Needless to say it was never used.

The post war fashions are discussed and one particular craze in Belgium was aided by black market sales of blue army hospital blankets. These were turned into stylish coats and capes!

I'd thoroughly recommend Kitted Out: Style and Youth Culture in the Second World War by Caroline Young to those with an interest in WW2 and the assorted uniforms.