This beautiful photograph is of three sisters, May Winifred, Maud Elizabeth and Dorothy Evelyn who served as Voluntary Aid Detachment for the British Red Cross during the First World War. 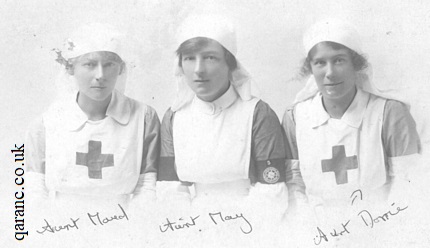 The three served in the VAD during WW1 and their three brothers saw active service where two sadly died in France and Belgium and the survivor was injured. They also had another sister who was already married with children during the time of the Great War. 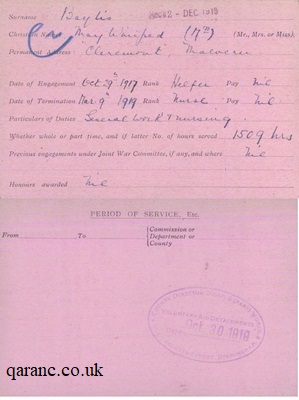 May's records show her to have been a helper first and then a nurse. She was married to Arthur Baylis. She served from 29th October 1917 to 9 March 1919 living at Claremont, Church Street, Malvern. Her duties being classified as General Work Nursing where she fulfilled 1509 hours.
Note the stamp at the foot of her records which reads: County Director B'Ham & (Part) Worcs Voluntary Aid Detachment 91 Charlotte Street Birmingham 30 October 1919.

May Winifred Lewis, was born in Hartlepool, in 1883, her father, James Henry, was 27, and her mother, Annie nee Roff, was 23. She already had a 1year old sister, Daisy Roff Lewis.

James Henry was an up-and-coming doctor of music, having been born in Malvern, Worcestershire, to a nursery proprietor. When the family finally settled in Essex, he established the Victoria College of Music and became professor of music.

May's brother Vincent James and his twin, Maud Elizabeth were born in 1884 in Royal Tunbridge Wells, Kent, England, when May Winifred was 1 year old. 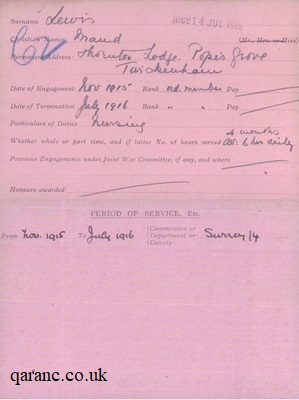 Above is Maud Lewis' VAD records which details:
Surname.
Christian names.
Permanent address (Thornton Lodge, Popes Grove, Twickenham).
Dates of engagement (November 1915) and date of termination (July 1916), rank (ordinary member), pay.
Particulars of duties (nursing).
Whether whole or part time, and if latter No. of hours served (4 months av. 6hrs daily).
Previous engagements under Joint War Committee, if any, and where.
Honours awarded.
Period of service, etc. from and to.
Commission or Department or County (Surrey/4).


Her sister Dorothy Evelyn was born on May 6, 1888, in Staines, Middlesex, England, when May Winifred was 5 years old. 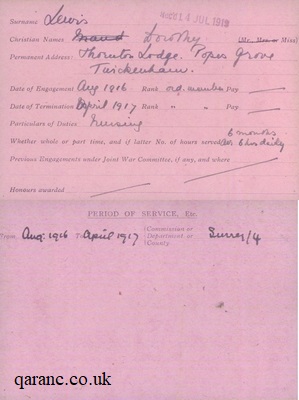 Above is Dorothy's records which shows that she served from August 1916 to April 1917 in nursing duties for 6 months and average 6 hours daily.

Her brother Hugh Portman was born on May 19, 1891, in Brentford, Middlesex, England, when May Winifred was 8 years old.

Her brother Denys Mervyn was born on June 3, 1897, in Twickenham, Middlesex, England, when May Winifred was 14 years old.

In the 1901 census she was still living at home but must have travelled to her grandparent's home in Great Malvern where she met her future husband.

She married Arthur Edward Baylis on April 7, 1910, in Twickenham, Middlesex, England. They had one child during their marriage, Henry. She died on May 3, 1957, at the age of 74.

When Maud Elizabeth Lewis and her twin brother Vincent James were born in 1884 in Royal Tunbridge Wells, Kent, England, their father, James, was 28 and their mother, Annie, was 24.

Read the history of the Voluntary Aid Detachment.