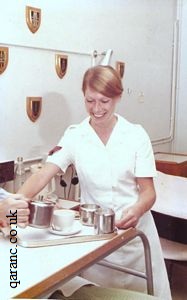 BMH Dhekelia was a very pleasant hospital to work in. Sunshine flooded in through the many windows. It was only about a 5 minute walk (or a 3 minute run if you were late) from our accommodation in Nightingale Barracks.

I had the opportunity to spend time working on all of the wards in the hospital. My favourite was the children's' ward. As Sue Simmons recalls earlier on this page, it was a very busy ward. There was a weekly Thalassemia clinic when many local Cypriot children were brought in for treatment. It was sad watching them lie there in bed while they had their transfusions. Sometimes I went inside the ward's very large birdcage to clean it out. I actually hated going in there and I would make such a fuss as the birds flapped their wings around me but it made the children laugh so I didn't mind.

The social life for QA's in Dhekelia was second to none. There were opportunities to get involved in many sports, from tennis to parachuting. Being some of the very few females in Dhekelia, invitations to parties came in often. Due to the heat we also worked shorter day shifts, starting at 7am and finishing at 1pm. That left us plenty of time to head to the beach. BMH Dhekelia is what many who were lucky enough to be posted there will recall it as a dream posting.

In 1974 that dream was to be shattered when, in July 1974, Turkish forces invaded Cyprus. This occurred after a period of unrest when the Cypriot president Archbishop Makarios was deposed and replaced by Nikos Sampson during a military coup. The first I knew about it was when a colleague woke me up, soon after completing a nightshift, on the morning of the 20th July to tell me we all had to report to the hospital as Turkish Troops had just parachuted into Nicosia.

As many patients as possible who could be discharged were moved out and then there began an orderly scramble by staff to prepare the hospital for mass casualties. The families of British servicemen on the island were evacuated and medical support troops were flown in from various units with empty spaces within the hospital becoming makeshift sleeping quarters for the extra staff. Security around the hospital was extremely tight. We had soldiers on the roof of the hospital as it afforded a clear view of the surrounding areas. Suddenly every soldier we saw around the base was armed. Gone was the idea of different dining rooms for other ranks and officers. During this time we ate together, mostly army rations, and washed up together. All the army training we had been through came into force and we worked well as a team. We were all confined to being either at the hospital or in our accommodation blocks but morale was high. We had a bar in the basement of the hospital called the Fidelis Club. The bar became our main source of entertainment.

We didn't have to wait too long before casualties started arriving at the hospital. We looked after both Turkish Cypriot and Greek Cypriot casualties. Many of the casualties were also from the United Nations Peacekeeping Force who were trying to establish a buffer zone on the island.

It was challenging to try and look after so many non-English speaking patients. As I remember, many of the UN casualties were from Finland , Denmark, Sweden and Canada. Their injuries were mainly gunshot wounds. We had one young French Canadian patient with so many injuries we didn't think he was going to make it. For about three months we treated him in the intensive care unit while he remained in a coma. We used to carefully treat his wounds every day while discussing our social lives. The soldier eventually made a good enough recovery to be repatriated to Canada. It was about 6 months later that same soldier, having made a full recovery, came back to BMH Dhekelia to thank the staff for the excellent care he had received. He also informed us with a grin of the times he lay listening to our social life revelations!

During shifts at the hospital we would listen to bombs going off in the town of Larnaca, approximately 12 miles away. Soon tent "cities" started to appear as more and more civilians became displaced.

The Turkish invasion ended with the partition of Cyprus along the UN-monitored Green Line in Famagusta, which still divides Cyprus. The once busy and prosperous city remains empty with hotels, office buildings and homes left to rot and continue to be a no man's land.

During the conflict many thousands of people lost their lives, including many civilians. We heard much talk of atrocities being carried out by both sides. Although this was disturbing to hear, our job remained, as always, to help the sick that came our way, no matter what side they were from.

My tour of Cyprus came to an end in January 1975. By then things had settled down as politicians began to try and find a political solution to the conflict. When I finally left Cyprus I was using crutches. When things began to settle down on the island I managed to fit in my second parachute jump. Unfortunately it when wrong and I ended up with three broken leg bones...but that's another story! Helen Wemyss QARANC.