What Makes a Good Psychiatric Nurse?

Do you meet the following criteria?

You are a woman.

You have all the attributes essential for a good surgical or medical nurse i.e. "sympathy, diligence and devotion to duty."

There are further requirements. Are you still on target?

You have that "God-given gift of saying and doing, without hesitation or apparent effort, exactly the right thing in the right way and at the right time." You may not always be "the cleverest or the best educated woman …. but no woman without it [God's gift to nursing] is suited to the care of the insane." Without this divine quality you might not have been appointed to work at European Mental Hospital in India.

I must hastily point out that these are not my words but those of Lt Col Owen Berkeley-Hill, Indian Medical Service, Medical Superintendent of the European Mental Hospital at Ranchi, 250 miles north east of present day Kolkata in India. He published his standards in the Nursing Journal of India which was reprinted in the British Journal of Nursing in July 1930 and from which the quotes are taken. 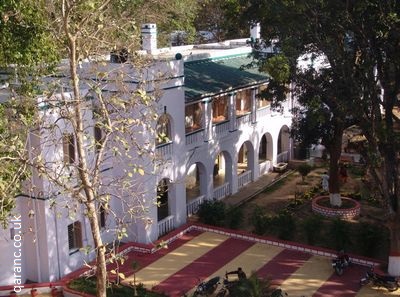 For my Ph D studies I have been studying the psychiatric career of Berkeley-Hill and the history of his hospital, which is now the Central Institute of Psychiatry in India. I would be delighted to hear from anyone with information about nursing in colonial India, particularly with psychiatric patients. If anyone has any family diaries, letters or other documents which might assist me with my work I would feel privileged to be allowed to read them.

My research so far has identified that Berkeley-Hill was genuinely eccentric, probably cantankerous but definitely committed to improving the lives of his mentally distressed European and Anglo-Indian patients. There may be some truth in his boast that the European Mental Hospital became the finest of its kind in Asia during his tenure.

Some of his forthright views might antagonise the modern Nursing and Midwifery Council but they were well intentioned if often patronising. Thus, for example, he did not see the need for male nurses as there was no violence on his wards. Yet other comments reveal some insight into the professional skills need by nurses, both then and today, required for a successful career in psychiatric nursing.

To continue the personnel specification:-

The nurse must possess limitless patience. She must be thick skinned to cope with the many irritable, abusive and insolent patients found in hospitals. To manage "insane patients" effectively she "must cultivate, assiduously, gentleness and tact and listen to all patients" without showing any favouritism.

Berkeley-Hill advises that she must not coax or lie to a patient in the hope of short term goals. She must never promise a patient who will not go to bed that they were merely being asked to go to their rooms to dress for a concert or a dance. If she does this she will inevitably lose respect through her deceit. In addition and "worse than this the patient will have lost confidence in the hospital as a whole" with repercussions for future treatment.

When away from the hospital the nurse must maintain strict confidentiality or "absolute reticence" at all times. For, says Berkeley-Hill, the fact that someone had been "under care in a mental hospital may do him, or her, irreparable harm when restored to the outer world. Sadly, his words are to some extent as true today as today as when they were written 85 years ago.

Echoing modern practice the colonel insists that attention must be given to making close observation of patient behaviour combined with the prompt recording of accurate notes before the nurse's memory is compromised. He reminds her that her words may one day be needed in a court of law. For this reason they should "always be statements of facts and never the expressions of opinion."

To date I have found little evidence that the doctor valued the opinions of his nurses. Do you think this has changed since 1930?

The numerous skills required by Berkeley-Hill of his psychiatric nurses must have meant an exacting job description and personnel specification. Would you have met the essential criteria?

Mike Young is a qualified social worker who retired in 2010 after a career in Social Services in West Yorkshire. This included a practical role in the closure in the 1980s and 1990s of several long stay hospitals, former asylums. He was the Professional Social Care Lead for Mental Health in his local authority and had been an Associate Director of a Mental Health NHS Trust. He made several visits to Pakistan and India to develop links between mental health services there and West Yorkshire. He is researching a PhD at the University of Huddersfield into mental health and the British in colonial India after 1858. He continues to work part time, for the Court of Protection, on the assessment of people with dementia.

He would be delighted to hear from anyone with information about nursing in colonial India, particularly with psychiatric patients. If anyone has any family diaries, letters or other documents which might assist him with his work he would feel privileged to be allowed to read them.

He can be contacted on mike.young111@btinternet.com