Part three can be read on the Diary Ambulance Train Jerusalem to Ismailia British Hospital then Suez WWII page.

It was a very unlucky beginning - and in another way lucky. When we got to Suez there was another terrific air battle going on, ships and factories going up in flames. The ship that was waiting for our unit was amongst them. Had we not been delayed we would have been on board. This meant a shot delay, but in the meantime an old grey looking vessel standing some distance down the Suez was taken over, the authorities wanting to get us out of the way. It was called The Dempster and was not at all attractive to look at. The Germans had taken it from the Dutch Navy before it was captured by our forces. It had a few enemy navy prisoners in a hold and they were being taken to Aden. This gave us a clue that the unit was making for Bombay. They took us aboard the Dempster by all sorts of craft. The aerial battle was abating by now, so we started on our journey in the darkness down the Suez Canal. Portholes were closed and no lights were allowed. The heat was almost unbearable, perspiration dropping off us and forming puddles wherever we stood. It was too hot to rest and we wore lifebelts the whole time. Next day we entered the Red Sea, which lives up to its name, in parts so clear you could see the red rocks through the water, and teeming with every kind of fish, some very large, monstrous porpoises and sharks. The sharks followed the ship, the porpoises rolling along making high water-falls.

Sister Ross in the Persian Gulf: 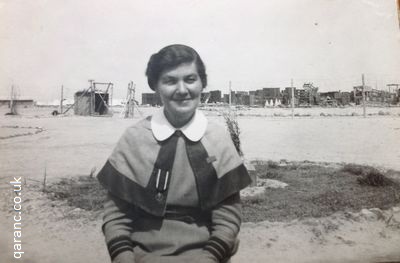 The voyage through the Red Sea was made under the protection of destroyers because of the submarines in this area. We followed the coast of Eritrea on one side and Yemen on the other, passing through the Straits of Bab el Mandeb into the Gulf of Aden, with French Somaliland and Jibuti on the right and Aden on the left of the ship. The heat was getting worse, this being June 1940. Sharks still followed us, and I noticed they carried long white creatures, one on the head, one on the middle of the back and one on the tail. They looked like white eels and are known as pilots, being supposed to lead the shark along.

The ship anchored outside Aden for forty-eight hours to take on high-ranking German submarine prisoners. Here the sharks bumped against the vessel, giving it a good shake. They were very interesting to watch. No one was allowed to land. After the prisoners had been put safely under guard we started up again, making for the Indian Ocean. In the meantime several of the troops and staff had collapsed with the heat. Our escorts left us to go on alone, but when the last destroyer was about two miles away an enemy submarine was sighted in the distance. The last we saw was a terrific chase which resulted in the submarine being caught. Soon after this one of our main engines gave out and it appeared that there was other damage also. This was kept quiet in case of panic. We remained stationary on the ocean for twenty-four hours until repairs had been carried out which would enable us to reach Bombay. During this time our planes kept flying around us, but luck was with us again, otherwise the Dempster would have been an easy target. Everyone sighed with relief when Bombay harbour was sighted.

On disembarking we were met by some high officials with the good news that all officers and nursing sisters were to proceed to the Taj Mahal Hotel. This hotel stands opposite the Gates of India, overlooking the Indian Ocean, is a most magnificent place built of marble and mosaic, and is chiefly used by the wealthy, the maharajas and statesmen. My room overlooked the Gates, The food there was excellent, with several English and Indian courses at each sitting. The rooms are in suites with huge marble baths, wonderful deep-pile Indian carpets and modern spring beds. There was a servant for each individual and he would sleep outside your bedroom door, calling you in the morning at whatever time you wanted and bringing a glass of fruit juice and cup of tea in solid silver receptacles. Then he would get your bath ready to step into. This, after what we had been through, seemed a dream. I had to pinch myself to make sure I was not dreaming. This lasted six days, giving us time to enjoy a rest and an opportunity of looking around Bombay. It is a wonderful place, the shops full of good things, but we were not allowed to add anything to our active service kit. I found a large English store in the main street with the name of Evans over the shop front. Curiosity made me enter and I found most of the assistants, male and female, either English or Welsh anxious for news of home, but I could not help them much on this point. They were most helpful in every way, and as they had just received a large new consignment of goods from the United Kingdom I replenished my kit for field service. 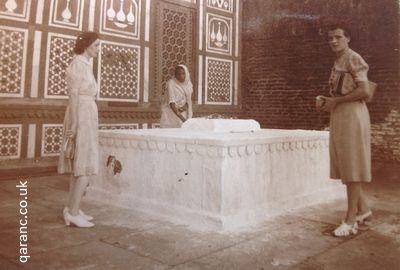 A few days later we had the news to proceed to Mesopotamia, now called Shaiba, which is in the Desert of Persia. No one knew what day the unit would embark. Then embarkation orders were cancelled owing to the fact that enemy submarines were found to be active in the area of the Persian Gulf. I was now able to continue my exploring. I visited the outside of the Tower of Silence in the centre of a most fashionable residential district. This is where the Parsees deposit their dead to be disposed of by hundreds of horrible fat vultures feeding on the corpses. The tower is built in balconies, one for male and one for female adults and one for children. They are placed here naked, the birds feeding on the flesh and the sun bleaching and rotting the bones. When the monsoon comes the rain washes the dust into the river. There is a small museum in the grounds, and a keeper showed and explained a small replica of the tower to me. The place was surrounded by a garden with all kinds of lovely flowers and plants. I sat there and watched the birds feeding on carrion. Small bones could be seen lying about beneath the bushes. The flower gardens on Malabar Hill were the same.