Leaving Jerusalem in April 1940 with a convoy of ambulances for the Lydda station, putting all the patients on to the ambulance train with Royal Army Medical Corps orderlies to look after them under my supervision, we commenced a twenty-four hours journey through the Sharon desert, sandstorms raging and filling our eyes, ears and throats. The heat was terrible: I was heartbroken for the boys who were lying so ill and having their dressings done under such difficulties. The windows of the coaches could not be opened and the fans were of little use. Our tea was brewed with boiling water from the engine. Finally we arrived at Kantara Station, unloading and transferring our patients into waiting ambulances, then crossing the Suez in special tugs. Then, complete with transport, another long road journey along the Suez Canal to a British hospital in Ismailia where the patients had to wait until it was possible for a hospital ship to get through safely. We arrived in Ismailia at nine o'clock in the evening, feeling tired, only to be told that the hospital could not accommodate them all, so on again to Moascar. Oh! How glad I was when they put me up at the sisters' mess. 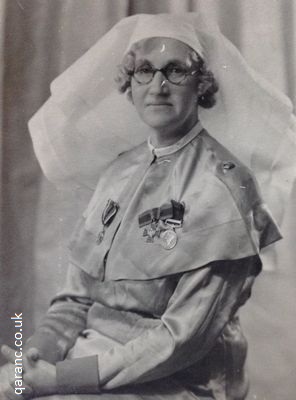 I was supposed to return in three days to join my own unit, but unfortunately I contracted clinical dysentery. I had to be warded and was very ill for four days. They sent for a specialist, who came by plane from Cairo and remained at hand for a few days. I believe they did not expect me to survive, but I was able to get up in three weeks. Everyone was so kind to me. My convalescence was spent visiting places around Ismailia, but my favourite places were the flower gardens. Some kind friends took me for motor runs into the Egyptian Desert, visiting the monument put up for the Australian soldiers who gave their lives in this area in World War I. This is alongside the Suez Canal. On one of these visits the liner Empress of India was passing through the narrow strip of water, and I was able to talk to them from the bank. They had come from India and were on their way home to England, but they did not arrive, the ship being lost through enemy action.

Before leaving Ismailia I asked about my patients and was told they had gone on to Suez, the next stage to embarking for home. They were all very excited, but, alas, the hospital ship was sunk with very few survivors, so the work was in vain. I rejoined my own unit, the return journey from Kantara to Haifa taking twenty-four hours, but a special sleeping coach had been laid on for me so that I could rest. A car waited at Haifa, travelling back through Nablus, a very old town, still a colony for Samaritans. Jacob's well lies near the town, being roughly 120ft deep and 8 inches wide. The women of Samaria, in their pretty native dresses, go to draw water twice a day, carrying the pitchers on their heads. These women love to wear lots of jewellery and always wear amber beads, said to keep illness away. The roads were rough, with steep hills all the way, so I was glad to come to the end of the journey.

I must mention Haifa town. It is a clean place, noted for its up to date hotels and shops, also its general post office and banks. It has three shopping centres, all in the area of Mount Carmel. Firstly, street level, with the main road, is called Kingsway, being all British. Secondly, there is the Jaffa Road, being mostly Arab, selling beautiful silks made in Damascus. They are a friendly and trusting race and always felt the British would not let them down. Thirdly, Hador Carmel. This is a mixed area, half-way up Mount Carmel, with Arabs and Jews trying to outdo each other and always fighting. The Palestinian police have their work cut out to keep order. On Mount Carmel is a large monastery and convent. The monastery housed Carmelite monks and was built over a cave. It is said that Elijah lived there and that it was on this site he slew the Prophets of Baal.

The sandhills of Haifa had quite a number of snakes that buried themselves, leaving a skin behind as they went into the holes. Thousands of small lizards darted about and at times, I am afraid they got under foot. My little dog used to spend hours playing with them and deprived many of them of their tails. The chameleon was a grand little fellow. The troops used to collect them and put them on their mosquito nets to feed on the flies. They lived chiefly on the mosmoha trees, blending to the yellow and green of the trees.

A few days after my return to Nazareth news arrived informing our unit that the Australians would take over from us in the area. Other hospitals had been fixed up in various parts of Palestine. Our unit, known as the Pioneers, received orders to pack our personal kit and all mufti, to be put into a bank store room in Jerusalem, active service gear only to be retained, this being checked by senior officials. Also orders were that no letters were to be written - we were under sealed orders. The hospitals coming out from home had quite a good time compared to what we had been through. They had huts fitted up for them and got quite a shock when told we had been living in tents with no lights or water laid on, our baths being taken in canvas baths that was part of the equipment.

Transport arrived early one morning to take us on our journey, also a guard to see that we spoke to no one. We had not the faintest idea of where we were going. The unit had to get away before the natives began to come out into the streets, and in a way it was rather exciting. Finally we arrived in a lonely compound alongside a railway siding used only for military movements, and again under canvas. It was very hot, but, fortunately, there was a large orange grove quite near so we had plenty of fruit drinks. The place was called Ben Yeda, near Sarafand. We were told it was to give us a rest and to get ready for another move. But what a rest! Flies bit us and bombs screeched around us with the enemy trying to find the troop trains, and most nights spent in dug-out trenches. We remained here for three weeks, not being allowed out and mail strictly censored. We were thoroughly browned-off.

At eleven o'clock one night a message was sent instructing us to pack the tents and our kitbags. When the RAMC had attended to the packing of the tents, a troop train arrived at the siding and we were given ten minutes to get everything aboard. Rations had been issued to last forty-eight hours, but again we did not know the destination. Despatch-riders on motor-cycle and guards armed with sten guns and rifles were to accompany us. Then an air raid started and the train had to remain hidden. An Intelligence unit overheard someone mentioning the time of our moving. This meant trouble, so all had to be cancelled and we had to dig ourselves in again. The security was stricter. We lived from day to day on what we could get to eat without touching our travel rations.

Then at five 0'clock one morning we were told to have our kit and tents packed within half an hour. No time for breakfast! Our journey commenced through sandstorms and terrific heat. Windows had to be kept closed because of the storm, fans turning over the foul air. What a journey! We arrived at Kantara half an hour after midnight feeling hungry and thirsty, almost on the verge of collapse. Here the NAAFI had a meal ready for us, with hot coffee and meat pies. How good it tasted! At 1.30am the second part of our journey began and we tried to settle down for a sleep, all the carriage windows being blacked out and there were no lights. We had been told the train was making for Suez.

The train had been running for just half an hour when we heard a familiar sound. The enemy had spotted the train, and they gave us a warm time for over an hour. Natives were running and screaming, their huts on fire, big buildings crumbling. We could not get out as all the doors had been locked. The train crawled along towards a tunnel, then remained still and we began to wonder if we would ever see daylight again. I know some that had not said their prayers for many a long day prayed for safety that night. Eventually the all-clear sounded. By this time it was almost daylight so we were able to open the windows for a breath of fresh air after being almost suffocated, and what a sight met our eyes! The wreckage and damage done in so short a time was almost unbelievable. Our planes had come to the rescue and now escorted the train as far as Suez.