The story of how Agnes was killed in World War One is the most touching and heart-breaking that we have researched. Staff Nurse Agnes Murdoch Climie was a member of the Territorial Army Nursing Service who gave her life whilst singing to a frightened soldier during an air raid and would not leave his side. 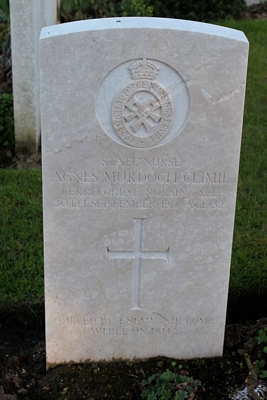 Agnes Murdoch Climie was born in 1885 in Cathcart, Glasgow. She worked at Stobhill Hospital in Glasgow before enlisting.

She died, aged 32 years, at the marquee hospital at St Omer in France on the night of 30th September 1917. The same air raid killed 18, including two other nurses (Nursing Member Elizabeth Thomson VAD and Nurse Coles and wounded 63.

She is buried in the Longuenesse Souvenir Cemetery, France.

There is an interesting article, with her photo, on the BBC website where church officers at Newlands South Church in Glasgow uncovered information about her. They became interested in her because her name was not on the war memorial. There are now plans to unveil a plaque remembering her on Remembrance Sunday 2018.

Her name is on the Five Sisters Window in the North Transept of York Minster.