Nursing Member Elizabeth Thomson of the Voluntary Aid Detachment served with the VAD at 58th General Hospital and was killed, whilst on duty, by enemy aircraft and is buried in the Longuenesse Souvenir St Omer Cemetery, France. 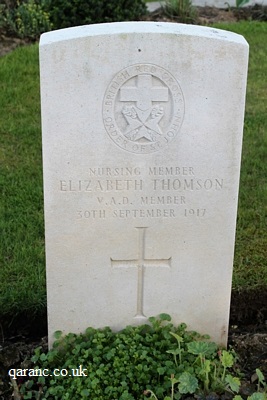 Under the emblem for the British Red Cross Order of St. John, her headstone reads:

Read about the history of the Voluntary Aid Detachment.