Pictured are the original plans for a proposed army hospital in Aldershot dated 1876. The hospital, known as the Cambridge Military Hospital, opened three years later. 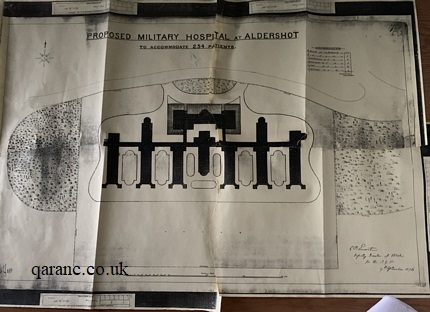 1 Itch ward for 10 patients = 10
Of note - Scabies, the "itch mite", Sarcoptes scabiei, was very prevalent in the army in the days of Queen Victoria. Any cases were isolated so as not to spread the mites to any uninfected men, or staff, hence its separate ward.

We can't make out what the signature at the lower right says.
Deputy ? of Works for the IGF 9th September 1876. 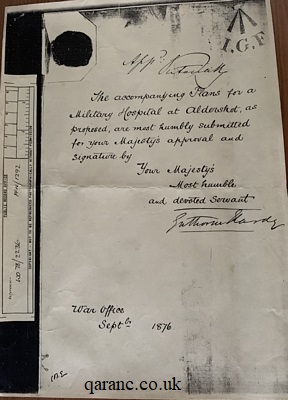 This letter with the plans, reads:

The accompanying plans for a military hospital at Aldershot, as proposed, are most humbly submitted for your Majesty's approval and signature by Your Majesty's most humble and devoted servant.

The signature is that of Gathorne Gathorne-Hardy, 1st Earl of Cranbrook, who was the Secretary of State for War 1874-1878, who oversaw the many Army Reforms set up by his predecessor.

Note the crow's foot at the top with the abbreviation I.G.F. which I'd welcome knowing what it means.
IGF could be Inspector General of the Forces. "An officer appointed under an Order in Council to oversee many duties formerly undertaken by a now obsolete Commander-In-Chief. The IGF in 1905 was Field Marshal HRH the Duke of Connaught."

It is dated War Office September 1876.

1932 Plans of the Cambridge and Louise Margaret Hospitals in Stanhope Lines, Aldershot Garrison.