Detailed plans of the Cambridge and Louise Margaret Hospitals in Stanhope Lines, Aldershot Garrison from 1932. 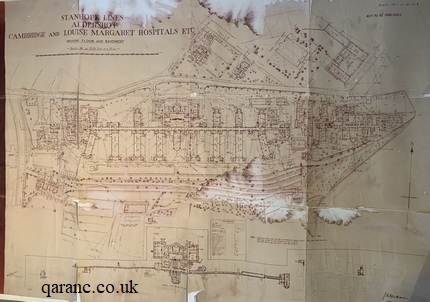 These detailed plans show the hospitals and accompanying buildings on the basement and ground floors.

Included are details such as the boiler house, Gun Hill Matron's and Sisters' Quarters. Accommodation such as Nive Lodge, Waterloo Lodge and Nivelle Lodge. NAAFI, nurses' quarters and quarters for Medical Officers at Cambridge House and tennis lawn.

Administrative block with Matron's office and those for the CO (Commanding Officer) and QM (Quarter Master).