On the left of this photo is a great example of a collapsible World War Two wash basin. In front of the bowl is the nurse's personal hygiene kit in a washbag. This improvised sink would have been filled using the large canvas water carrier in front of the stand. It would have formed part of her kit, usually bought at own expense, and transported in her trunk. 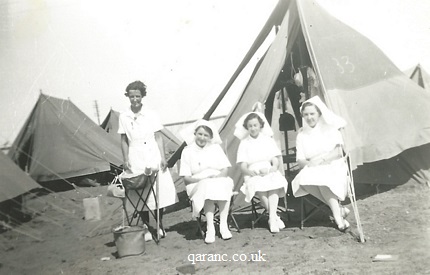 The photo is also a fine example of the QAIMNS tropical dress and veil uniform.

See more from this collection on the Egypt World War 2 Photo Album page.