Little is known about this wonderful World War One photo and I'd appreciate any help in identifying the location and other information. The owner's paternal grandfather is the gentleman seated on the bottom row, second from the right. He seems to be wearing a Durham Light Infantry cap badge which was her grandad's regiment. 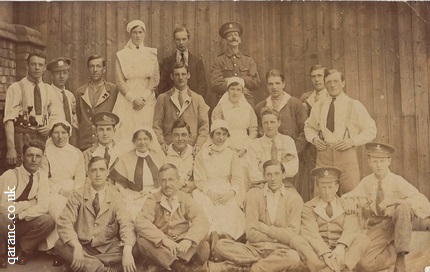 He lived for about 20 years but suffered appallingly during that time due to the after effects of the gas. Sadly, his son died when she was only 14, so she didn't get the chance to discuss family history in a meaningful way.

She says: I do know that Dad also received some great nursing during WW2 and would probably not have survived that war without the QA's help.

Her great uncle, John Charles Woods, would also have been cared for by QAs. He was in the Tank Regiment and died of his wounds in France on 03/05/1918. He is buried at Etaples Military Cemetery.

We think this is in a Home Front hospital, after overseas care by the QAIMNS. The nurse in the veil and cape has the T insignia on the edge of her grey and scarlet edging so she is a member of the Territorial Force Nursing Service whose wartime role was to serve around Great Britain in the 23 Territorial Hospitals (TH). Though some members of the TFNS did serve in France.

Some of the patients are wearing the Hospital Blues uniform which I'm not aware was worn outside of Britain at that time.

I think the other nursing staff may be members of the Voluntary Aid Detachment or locals wearing locally recognised nursing uniforms. 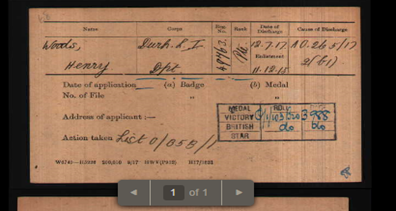 His medal card shows his entitlement to the Victory Medal and the British War Medal and that his regimental number was 49763. His date of enlistment was 11.12.15 and his discharge was 12.7.17


If you can help with any information, please contact me and I shall pass it on.